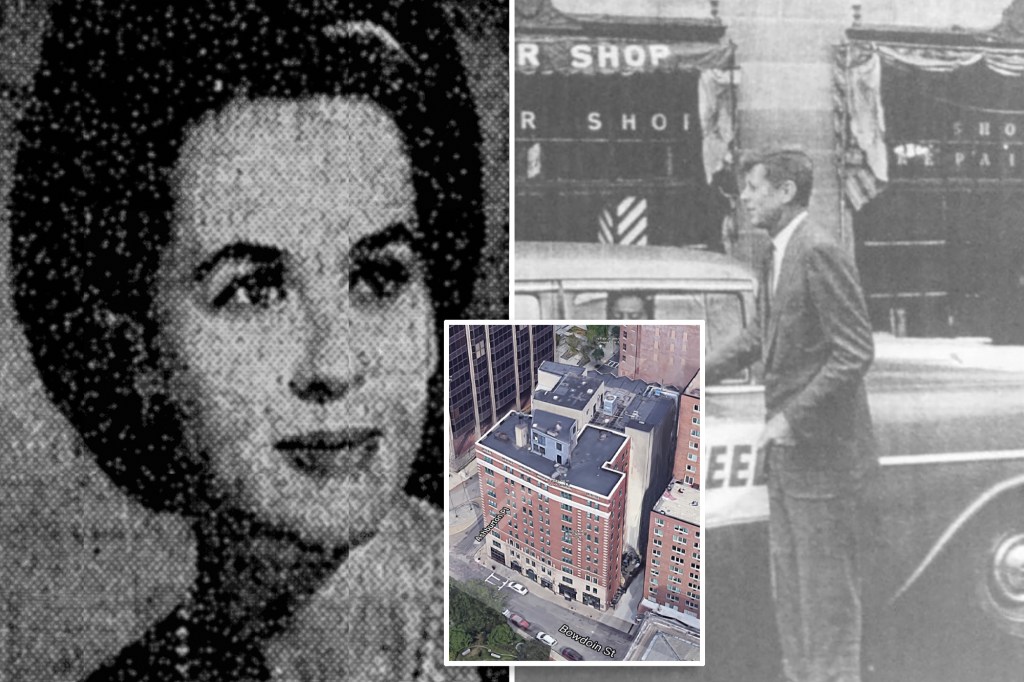 Diana de Vegh rendezvoused with John F. Kennedy in his Boston apartment from 1958 to 1962, she recently told The Post.

But the full history of the love nest itself has also been kept hidden — until now.

John F. Kennedy’s tiny, $95-a-month Boston rental was his official — and only known — residence there from 1946 until his death, according to the John F. Kennedy Presidential Library and Museum.

“Of course, it was fantastic for anyone to believe that a man of his background and his wealth could ever live in a place like 122,” Judge Francis X. Morrissey told the library in 1964, referring to the house number on Boston’s Bowdoin Street. “It was not even modest.”

Kennedy — who also had homes in Washington, DC, McLean, Virginia, and New York City — visited the apartment on weekends and had a roommate on weekdays from 1956 to 1961, according to JFK library records.

He needed the address to establish residency in Massachusetts, and it was convenient to the Massachusetts statehouse across the street.

But for four years of his 17-year residency in apartment 36, the married president — then in his 40s — also used the space to woo a then-20-year-old Radcliffe College junior he met at a re-election campaign event.

“Ah, yes. The apartment. The place he kept in Boston. There, I would find out how to be special,” de Vegh told Air Mail News. “In this apartment, something different. He was leaning toward me, with such a sincere gaze.”

Kennedy and de Vegh’s affair would traipse from New York City to Washington, DC, where she hoped to get more of the president’s attention, she said. Their affair ended in 1962 over a political conflict of interest, about the time Kennedy is believed to have begun his more-famed affair with Marilyn Monroe.

And while de Vegh had been smitten — “I was 20 years old, with a full supply of hormones and madly in love with this compelling man,” she confessed to Air Mail News — she kept the affair secret until now.

“Back then, nice girls did not have sex, that was a no-kidding-around situation, so I did not talk about it. It just wasn’t something I discussed,” she told The Post.

Inside the 1926 red brick Colonial revival building, Kennedy’s 720-square-foot apartment had a small living room, a kitchen with a door, two bedrooms and a bathroom, guests recalled.

The fireplace didn’t work, landlords told The Post. The building’s transformer often went off, leaving them without power. The chairs and tables were broken, and the only nice piece of furniture was a bed — for the former president’s injured back, according to Morrissey.

“People used to come in and they would think it would be part of an act. They couldn’t believe he actually lived there, which he did,” said Morrissey.

On the bookshelf, copies of “Lolita” and “Call the Lady Indiscreet” mingled with economics and Russian history titles like “Economy in the National Government” and “Rasputin: Neither Devil Nor Saint,” according to a catalog of over 150 books compiled by the John F. Kennedy Presidential Library and Museum.

He also had a “little 10-cent or 25-cent football” that he’d throw around the apartment, a television for political broadcasts and an inexpensive music player, added Morrissey.

Strangely, the door could be locked from the outside, causing Louis Weinstein, a lawyer who consulted with Kennedy about veterans’ housing, to get locked inside.

“There was a strange lock, because you couldn’t open it from the inside, and I wondered what would happen in case of a fire,” Weinstein told the library in 1982.

The apartment sat on the third floor above the shoe cobbler on the first floor, Leeder Management Co. CFO Walter Laughlin told The Post.

The Post also reached out to other tenants in apartment 36, including a recently deceased professor — The Post contacted his brother — and a former MIT student, according to archived Boston city directories.

Visitors inside the apartment

The Post was unable to find any living witnesses of de Vegh visiting the apartment. Though the building has been with the same family since at least 1944, those who remember the Kennedys have passed away.

David Dorsey, property manager and grandson of the late George Washburn — who worked on the property during Kennedy’s tenancy — told The Post his predecessor was tight-lipped about Kennedy’s personal life.

But Weinstein — the previously mentioned friend who once got locked inside — said that despite the apartment’s size, Kennedy crammed eight to 10 people into the space at a time.

Kennedy hosted members of his family — including his wife Jackie, his brother Teddy (Edward) Kennedy and Joseph F. Gargan, nephew of Rose Kennedy — as well as college professors, statemen and other dignitaries, like former JFK aides Kenny O’Donnell and David F. Powers, Morrissey and Cramer said.

The apartment was not only busy at times — Kennedy also had a roommate for several years. Kennedy invited the late Massachusetts state Sen. Robert P. Cramer to spend his weekdays at the pad from 1956 to 1961, he told the JFK Library in a 1987 interview. He got the boot when “Jack” was elected president in 1961 because the Secret Service found the arrangement too “complicated,” Cramer said.

After John F. Kennedy’s assassination in 1963, the Kennedy library rented the apartment for several years as an office for library administrator Helen Keyes and her secretary, Justin O’Donnell, who approved expenses, handled requests from foreign countries, fielded speaking requests and produced press releases, according to a 1964 Kennedy Library directory.