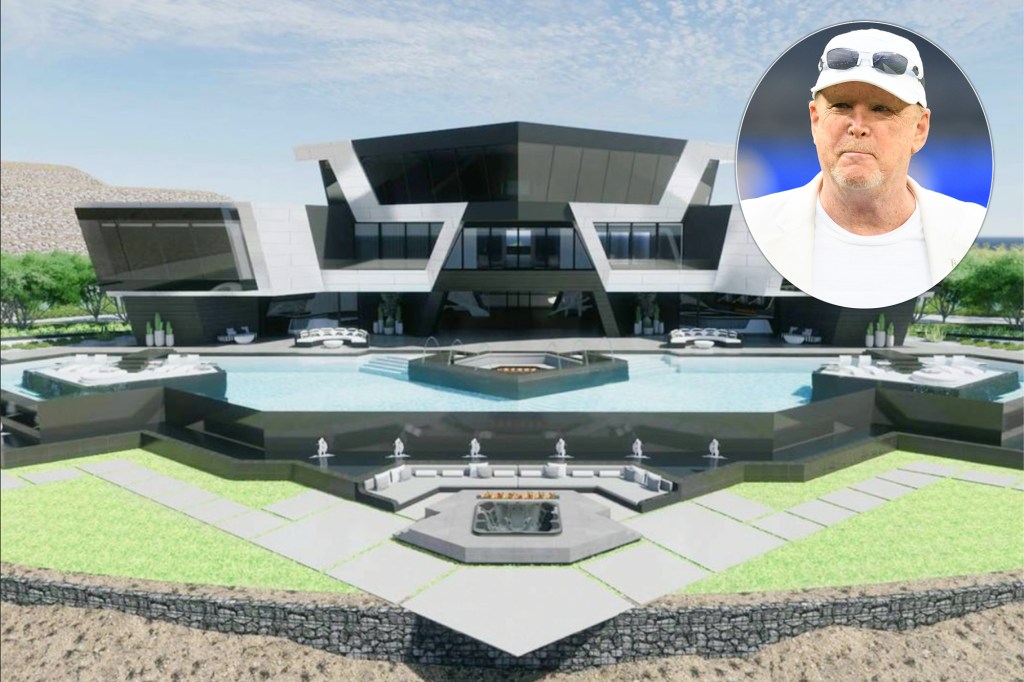 Talk about working from home!

Mark Davis, the owner of the Las Vegas Raiders, is custom-building a Nevada mega-mansion that mimics the angular lines defining his team’s practice facility, headquarters and Allegiant Stadium.

It has a penthouse, a bridge and a garage the size of most mansions, floor plans show.

“It’s a really distinct and exciting design. It’s amazing example of how the team can work with a client with a particular style and taste,” architecture firm Blue Heron founder Tyler Jones told The Post. Jones declined to comment on details of the house’s layout.

Mark Davis, 66, inherited the NFL team in 2011 from his father Al Davis. He purchased the 6.32-acre lot outside Law Vegas in Ascaya, a private luxury community, in August 2020 for $6 million, records show. The Raiders did not respond to The Post’s request for comment.

Davis’s new 15,046-square-foot mega-mansion will be a three-level, five-bedroom, ten-bathroom valued at $14 million, according to city permit records obtained by The Post.

The most noticeable feature of the home’s exterior is a large pool with three islands — two island decks reachable via bridges and a third sunken pentagon-shaped seating area that jets into the water. The middle island has a built-in television, a fire and several jumping fountains, according to the permit application.

Behind the pool is a patio with two covered seating areas. There are two more patios hidden behind the front arms of the building, according to plans.

In front of the pool is a lower terrace with a jacuzzi, a fireplace, built-in seating and about 18 fountains lining the pool in a shallow pond, the rendering shows.

But what the rendering doesn’t show is the unparalleled floor plan layout of the interior.

“Through the renderings, you really get a sense of how distinct and personalized it is,” Jones told The Post.

Enter through the foyer to discover a great room, a steam room, a bar, two kitchens, a pantry and two bedroom suites, floor plans show.

Behind the great room is a porte cochère — a covered driveway, like at a hotel — accessible through a circular driveway that wraps around the back half of the house and pierces through the building’s side, floor plans show.

Behind the covered driveway is a 1,342-square-foot man cave surrounded by a garage the size of most mansions — 5,422 square feet. On each end of the garage are two one-bedroom, one-bathroom guest casitas with private porches and entrances, floor plans show.

Second floor with a bridge is mostly outdoors

Take an elevator or climb a spiral staircase to the open-air second floor with an enclosed library that peeks into the first-floor great room. Outside is the 303-square-foot deck, which is visible in the rendering of the front of the house.

From outside on the second floor, an office and a dining room are standalone mini-buildings with floor-to-ceiling windows, floor plans show.

A bridge extends from the deck over the porte cochère to a mysterious unlabelled area. The man cave underneath peeks up into the end of the bridge area. The second floor ends before it covers the massive garage, floor plans show.

The top-floor penthouse suite is stacked only on the front side of the building. The large bedroom has a foyer and two full bathrooms, the floor plan shows.

In a rarely-seen design, the penthouse suite is almost twice the size of the library it sits on the office and the dining room below do not provide support for the top-heavy structure.

“This home is going to be an iconic design that will stand the test of time, and I am really excited and proud to be a part of it,” Jones told The Post. “It’s really special.”

The Federal Reserve is likely to hike interest rates again. What that means for you
Julia Fox claims mice-filled home will stop son from turning into a ‘f–king prick’
How Kyle Richards’ husband Mauricio Umansky built a $57B real-estate empire
Weekly mortgage demand jumps 7% as interest rates drop to lowest level since September
Patrick Mahomes is quietly building a multimillion-dollar real estate empire