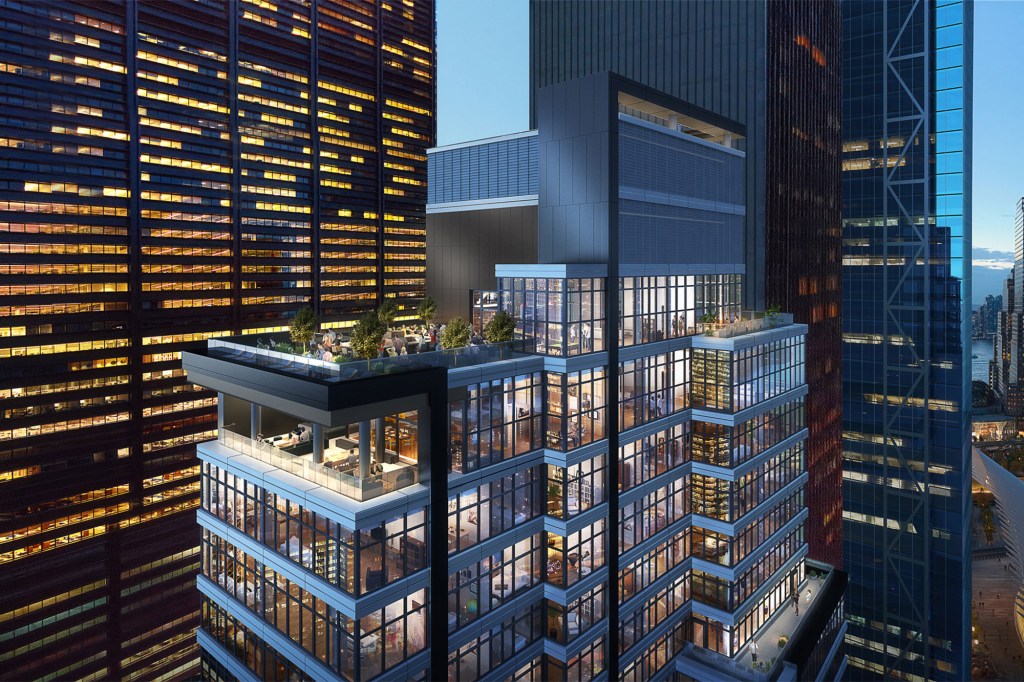 Lower Manhattan’s residential renaissance is back on after the pandemic hiatus. Since 40 percent of the district’s population of 64,000 left their homes after COVID-19 struck in early 2020, many have since returned or moved in for the first time. The district below Chambers Street has rebounded to 84 percent of its earlier occupancy, according to the Downtown Alliance, which also forecasts that the total will soon exceed its pre-2020 total.

The trend, which doesn’t include Battery Park City, is a hopeful portent as SL Green launches 7 Dey Street. The glass-wrapped, 34-story, mixed-use tower rises above and next door to the MTA’s Fulton Transit Center headhouse at the corner of Broadway and Dey.

Although SL Green is more active in Midtown, where it developed One Vanderbilt, the publicly traded REIT began investing in Downtown a few years ago. Its newest project, 7 Dey, cost $306 million including land and air-rights purchases and construction costs.

As the first downtown project developed under the state’s Affordable Housing in New York program, 7 Dey brings to market 206 rental apartments of which 30 percent are defined as affordable. (Participation provides developers with a real estate tax benefit.)

Some 22 units have already been leased or have leases out after barely two weeks of unadvertised marketing, said SL Green senior vice-president Harrison “Harry” Sitomer.

The FiDi area’s condo market is overbuilt with nearly 1,400 unsold units, but the rental market is a different story.

“There’s incredible demand,” Sitomer said. “We did a soft launch with no Instagram images and we’re already fully booked for tours for the next two weeks.”

SL Green made its first move at the site when it bought a few small buildings at 187 Broadway in 2015. It later added 183 Broadway.

“Then we decided to go bigger,” Sitomer said. “We approached the MTA about purchasing air rights from the headhouse site, which gave us an additional 65,000 square feet. That brought our total to 260,000 square feet. Along with a light-and-air easement over the transit headhouse, we were able to offer fantastic views.”

Apartments, which are being offered through Douglas Elliman, boast oversize living rooms and wall-to-wall windows. Building amenities available to all tenants include a state-of-the-art Jay Wright fitness club, lounges, co-working space and what Sitomer called “spectacular” outdoor terraces on the 31st and 32nd floors.

A commercial portion includes 26,000 square feet of office space on floor 3 to floor 5 and 17,000 square feet of what Sitomer called “flagship” retail yet to be leased. SL Green worked closely on the multilevel retail, which is column-free on the ground floor, with tower architect FXCollaborative to make it as appealing as possible.

Why the name “7 Dey” rather than a cute or pretentious moniker like those at other new residential towers?

“We wanted it to be about the address,” Sitomer said. “Our tenants are mostly young professionals — cool renters who want to be downtown and close to subways.

“The momentum of this building makes me very optimistic about the future of Downtown and New York,” Sitomer said.

Talk about a rent break!

The team behind The Dime, the new, mixed-use project in Williamsburg, has a deal that sounds too good to be true – a year’s free rent on 13,000 square feet of office space that’s worth about $900,000.

The Dime, named for the landmarked former Dime Savings Bank Building that the project’s developers plan to market for retail, will soon be inviting applications from what it calls “visionaries and creators.” It further breaks them down as “groundbreakers, young entrepreneurs, disruptive agencies, emerging business leaders, startups and inspiring breakthrough brands.”

One user will be chosen based on those criteria by Charney Companies and Tavros Holdings principals in consultation with leasing agent JLL to enjoy free use of the state-of-the-art space in the handsome, new 23-story tower on Havemeyer Street next to the former bank. Application details will be posted in the days ahead on The Dime Web site.