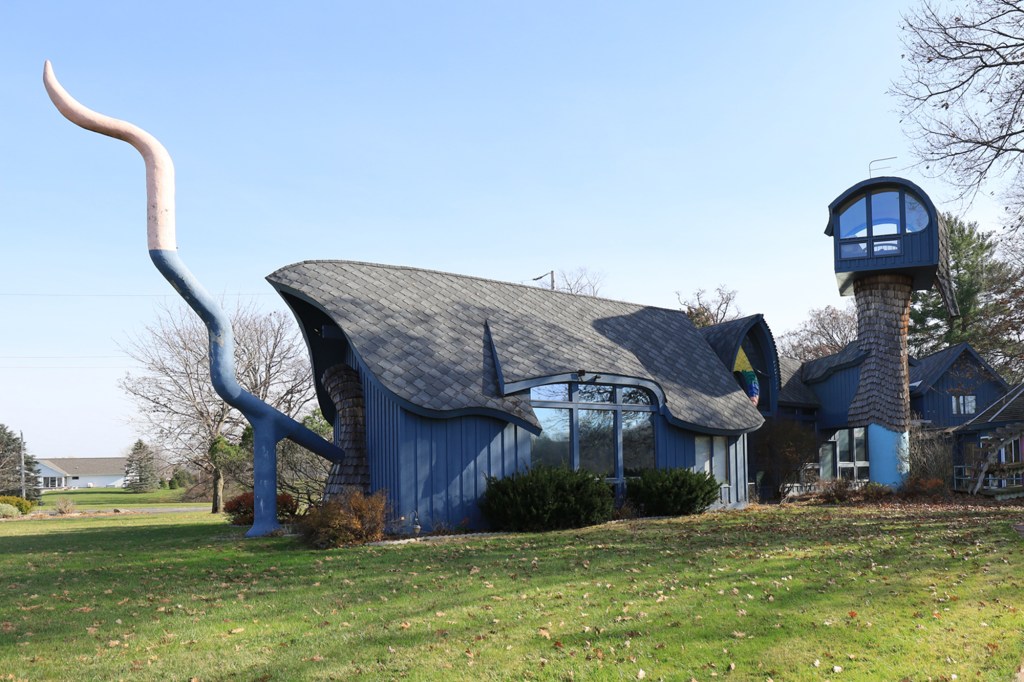 A property that has been dubbed “Dragon House” with its very own tail is back on the market for $540,000.

The eccentric structure, which is situated on over 16 acres of land in the city of Saginaw, Minnesota, even comes with its own rotating tower.

Initially listed in 2019 for $850,000, the home has since seen a significant price reduction after it remained on the market for a year without any offers. “I’ve been doing this for 30 years. This is the most unique home I’ve ever seen,” the realtor who previously held the listing told MLive.com.

It made its way back on the market in January, but it appears its quirky nature has indeed made it difficult to find a buyer.

More than a million dollars has been invested into the property since, according to the listing.

The estate features a mushroom-style flat roof, with the large tower to one side and the “tail” to the other. The motorized tower has been compared to the world-famous CN tower in Toronto due to its rotating feature.

The tail – a large curled pipe attached to the side of the house – is actually a chimney serving the wood-burning fireplace in the family room, according to Jam Press.

The estate features the main house, the guest house, a greenhouse, a barn used as an entertainment building complete with a gym and table tennis and a 1-acre creek with a bridge.

The main home spans over 4,600 square feet and seems pretty normal compared to its structure. With five bedrooms and four bathrooms, the home boasts cathedral-style vaulted ceilings and a walk-in closet.

The original owner was a prominent businessman who owned a trucking company. The main residence was built in 1978, with the tower completed in 1988.

“I think the tower had a lot to do with him being able to better communicate with his trucks at the time,” Century 21 Signature Realty agent Cris Sears told Jam Press.

“Unless you see the tower, people don’t realize how massive and solid it is – I think you could drive a bus full-speed into it and it would be fine.”

Patrick Mahomes is quietly building a multimillion-dollar real estate empire
Seth Rogen to host slumber party at his LA creative retreat
Hong Kong services to rebound as China reopens, but UBP says sector is coming from ‘fragile situation’
3 key things to know before opening a home equity line of credit
Mortgage rates drop to the 5% range for the first time since September