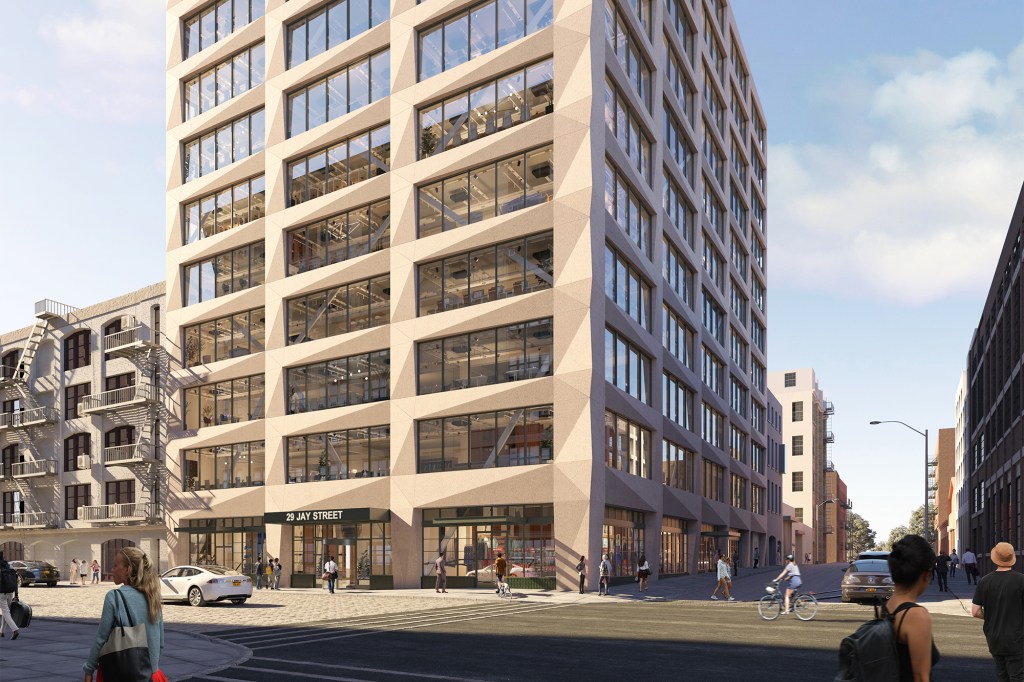 Anyone can boldly announce plans for future office buildings that have no official groundbreaking dates. It’s another to actually start construction amid the lingering pandemic when the city’s overall office market continues to see record-high vacancy rates.

On Sept. 14, developer Edward J. Minskoff and JP Morgan Global Alternatives will take the plunge on 29 Jay Street, a 252,000 square-foot office and retail address to rise in Dumbo. It’s believed to be the first ground-up office project in the hip Brooklyn neighborhood in a century.

It isn’t the first such brave stroke this year. In July, Hudson Square Properties put shovels in the ground at 555 Greenwich St., a 270,000-square-foot office tower which, like 29 Jay St., started work without any pre-signed tenants. But Minskoff’s investment might seem even riskier in the atmospheric, hard-edged neighborhood best known to the public for apartments and art galleries, although it’s taken on a growing commercial role over the past decade.

It’s “the most exciting [project] I have undertaken in my 40-plus years of office building development,” Minskoff said in a statement – an impressive statement by Minskoff, who was chief executive of Olympia & York USA when it built the World Financial Center (now Brookfield Place).

The new, 11-story Dumbo structure will stand at the corner of Jay and Plymouth streets, one block from the East River and Brooklyn Bridge Park. Minskoff bought the site, which was home to a two-story warehouse, for $61.5 million in March of 2020.

Bringing the project to fruition required cooperation with the City Planning Commission to rezone it for higher-density use and the Landmarks Preservation Commission, which approved the design by Marvel Architects.

Minskoff noted that some observers snickered when he launched 51 Astor Street in Greenwich Village without pre-signed tenants a few years ago. But he had the last laugh when the project quickly filled up.

There was no word on asking rents at 29 Jay St.

But Minskoff said the building’s 23,000-square-feet floorplates, bike storage facilities and tenant locker rooms would appeal to companies that hire the “young, tech-savvy populations” of nearby Vinegar Hill, Brooklyn Heights and Williamsburg.”

DailyPay’s move is believed to be the largest sublease so far signed since the start of the pandemic. It comes against the backdrop of an overall Manhattan reduction of 670,000 square feet sublease availability in August, according to Colliers International.

The expansion also illustrates the resilience of 55 Water St., owned by a subsidiary of Retirement Systems of Alabama. We watched the landlord’s work crew as they struggled to remove 35 million gallons of seawater that flooded the tower after superstorm Sandy in 2012.

In addition to S&P, which still has 1 million square feet at 55 Water St., other tenants include EmblemHealth, Hugo Boss and McGraw Hill Financial.

The property and retail worlds are mourning the untimely death of Amira Yunis, a powerhouse CBRE broker who succumbed to cancer last week at 51. Well-liked Yunis rose from modest midwestern roots to a modeling career with the Ford agency and ultimately to the ranks of the city’s premier retail-leasing dealmakers.

Her milestone achievements that Realty Check covered over the years included major leases for a Vacheron Constantin boutique on East 57th Street and the huge new Urbanspace food hall at 570 Lexington Ave.

In 2006, Yunis won the Real Estate Board of New York’s coveted “Ingenious Deal of the Year” honor when she brought Trader Joe’s to its first Manhattan location on East 14th Street.

This tiny castle is free for anyone who can move it
Seth Rogen to host slumber party at his LA creative retreat
Patrick Mahomes is quietly building a multimillion-dollar real estate empire
London’s rental market is in crisis. Here’s why and how renters are struggling
New York AG will seek sanctions on Trump, lawyers over ‘false’ court filings in fraud suit