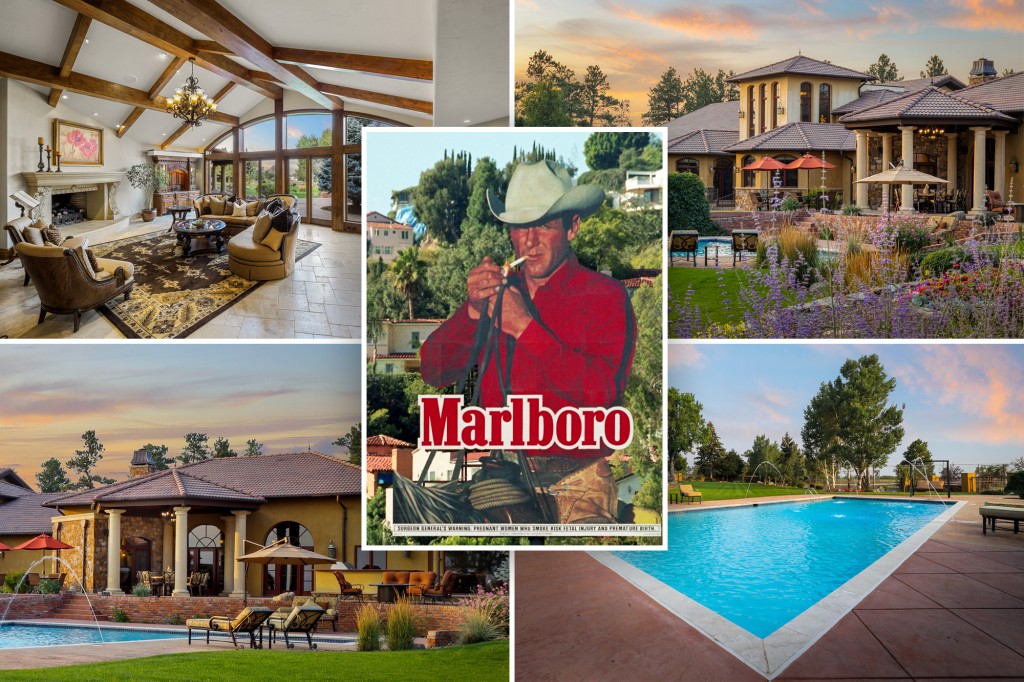 The original Marlboro man — a cowboy named Robert Morris who famously refused to smoke — seemed to like fresh air.

And he left an $8 million 15-acre Colorado legacy to prove it.

“Norris was looking for a piece of land with a perfect view of Pike’s Peak,” listing broker Amie Streater of Engel & Voklers told The Post.

In 1961, the then-31-year-old selected this mountain haven to custom-built a mansion for his growing family.

Marlboro recruited Norris in 1955 before the surgeon general declared smoking a health hazard in 1964. After 14 years with the Phillip Morris-owned brand, he said he was setting a bad example for his children and quit the position, The Post reported after he died in 2019. Norris lived till age 90, unlike other Marlboro men who died decades younger.

Some 50 years after the cigarette-sponsored actor and rancher selected the plot, his now 14,430-square-foot mansion has been re-listed for $8 million.

It was first listed for $7.2 million in 2014 and has gone up and down in price ever since, the listing shows.

Today, the eight-bedroom, 10-bathroom home has several unusual features including an ice rink, a saltwater pool and a tribute to the late Norris, who was pals with John Wayne.

The shrine-like nook, nestled in the kitchen, has photos of Norris, a copy of “The Cowboy and his Elephant” (a story in which Norris stars) and an inscription of Norris’s favorite sayings (pictured below). The artifacts are included in the sale, Streater told The Post.

The current owners, land developer Rob Oldach and his wife, author Denise Oldach — who also don’t smoke — bought the property in 2006 for $2.6 million and spent $5.9 million remodeling it, the Wall Street Journal reported in 2019.

“The current sellers took it down to studs, added onto it and updated it to make it feel more contemporary while keeping its historical integrity,” Streater told The Post.

The most obvious 2008 addition is a 5,300-square-foot ice hockey rink with a pitched roof and a locker room that cost $420,000 at the time, according to permit records.

But they also added a theater, two heated three-car garages and more bedrooms, according to Realtor.com.

The 15-acre lot also now offers a tree-lined, gate drive, a covered entry, a saltwater pool with fountains, concrete patios, a full-sized tennis court and a driving range, according to the listing.

And the primary bedroom suite has been updated with a new custom ceramic gas fireplace, separate walk-in closets, a coffee bar and a private fitness room.

Along with secondary bedrooms, it encloses a private outdoor courtyard that is separate from the rest of the property, according to the listing.

New York AG will seek sanctions on Trump, lawyers over ‘false’ court filings in fraud suit
London’s luxury home sellers turn to WhatsApp as private sales surge
3 key things to know before opening a home equity line of credit
This tiny castle is free for anyone who can move it
Milanese-inspired eatery Casa Lever renews long-term lease at Lever House