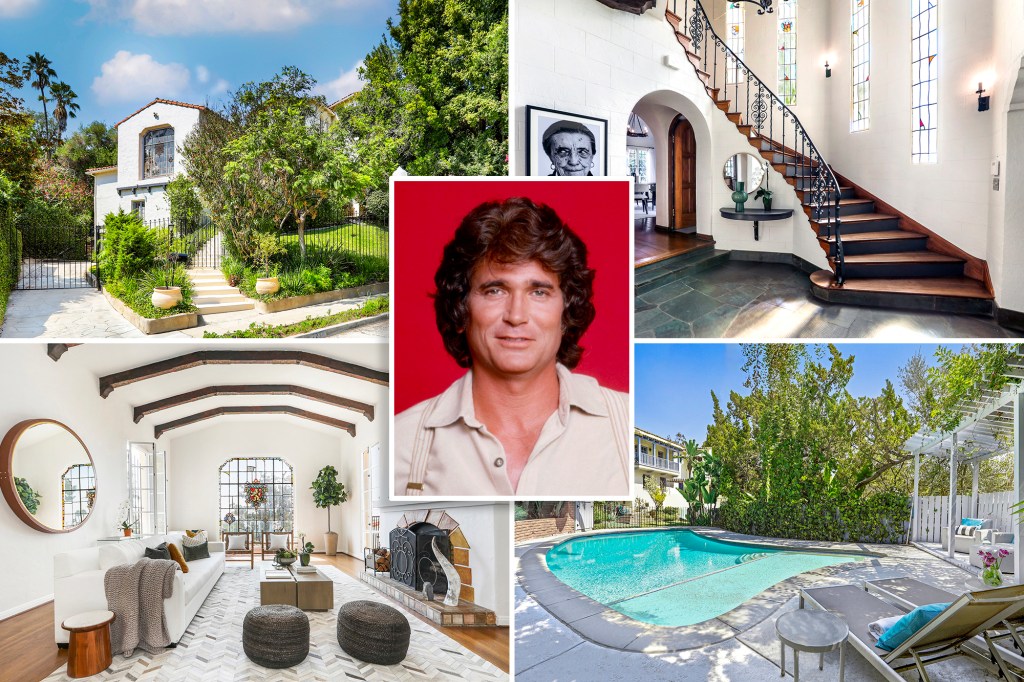 This $3.88 million house isn’t little, nor is it on the prairie — but it did once belong to Pa from “Little House on the Prairie.”

In June 1960, “Little House on the Prairie” creator Michael Landon — who had not yet scored his role as Charles Ingalls — used his new “Bonanza” money to buy a Los Angeles Spanish revival house for his growing family.

But he would soon divorce his first wife, Dodie Levy-Fraser, amid his rising fame and an affair that would lead to his second marriage. The family owned the 4,795-square-foot house for a year and a half.

At first, the family — which included Fraser’s son Mark from a previous marriage and two adopted children, one of whom they gave up to another family in the divorce — seemed to be settling into the Spanish revival. They hosted cats, a dog and numerous houseguests including scribe Rona Barrett, she wrote in her gossip column.

Landon even added a pool to the family home in the summer of 1960, permit records show.

But their time in the home was short-lived. They sold the house in February 1962, the deed shows. It is unclear where they lived in the following months, but Landon and Fraser finalized their divorce later that year.

Landon quickly married his second wife, Marjorie Lynn Noe, whom he met on the set of “Bonanza,” on January 12, 1963. They would go on to have four children before they divorced in 1982 when he fell for his third wife, Cindy Landon, on the set of “Little House on the Prairie.”

But the memorable Los Angeles house is remembered in numerous articles and photographs from the time, and it’s easy to see why. The gorgeous white stucco mansion, built in 1926, boasts arched doorways, Juliet balconies, terra-cotta tiles and vintage bathrooms.

An arched wooden door opens to a two-story foyer which has a winding staircase leading past stained-glass windows to a hand-stenciled, circular vaulted ceiling, according to the listing.

Across from the staircase is a sunken living room with 12-foot coved ceilings with hand-painted wooden beams. The fireplace is illuminated by a huge stained-glass picture window, photos show.

The living room connects to the game room with windows overlooking the 0.27-acre lot with a garden and a swimming pool with a Baja shelf, according to the listing.

From the main foyer, guests can also access an octagonal breakfast room, a dining room with large windows and a bright white kitchen. The kitchen has red terra-cotta floor tiles, an arched window and a patterned tile backsplash, photos show.

Upstairs, several bedrooms have balconies. The bathrooms have arched doorways and vintage tiles with pops of pink and green, photos show.

The basement has a screening room with a full bar with black and white tiles, a mirror backsplash, black countertops and seating for three, photos show.

The bar leads to a projector-based home theater with a retractable screen. The room has six red-velvet theater seats, a stained-glass oculus window, a fireplace, a huge “Carter the Great” poster and columns with black marble pedestals, photos show.

The actor was also known for his roles on the series “Bonanza” and “Highway to Heaven” before he died at age 54 in 1991 of cancer.

The one-time Collingswood, New Jersey, resident had a varied life, once even discovering sunken treasure.

He was married three times and had nine biological and adopted children including his Emmy-winning soap opera actress daughter Jennifer Landon and producer Mark Landon, Jr., neither of whom responded to The Post’s request for comment.

Here’s what the Federal Reserve’s 25 basis point interest rate hike means for your money
Patrick Mahomes is quietly building a multimillion-dollar real estate empire
New York AG will seek sanctions on Trump, lawyers over ‘false’ court filings in fraud suit
This tiny castle is free for anyone who can move it
Julia Fox claims mice-filled home will stop son from turning into a ‘f–king prick’