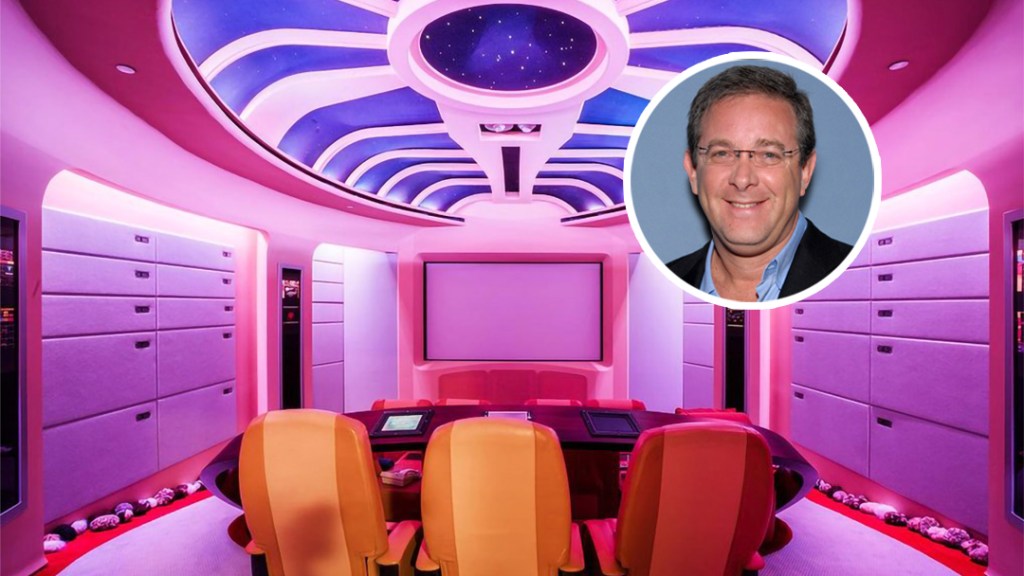 Who would imagine a Florida mansion just might be the perfect place for a die-hard (and deep-pocketed) Trekkie to live long and prosper? Financial investor Marc Bell, a Tony-winning Broadway producer, owner of space company Terran Orbital and lifelong “Star Trek” fan, is seeking a tenant who’ll transport themselves to his delightfully playful “Trek”-themed Boca Raton mansion … and can afford to pony up $199,900 per month for the privilege.

The striking estate has been for sale on and off since 2014, when it first popped up with a $35 million price tag. After an unsuccessful series of steep price cuts — the last ask, in April 2020, was a tad under $20 million — the offbeat manse is available on the rental market. However, if one is seeking to make a more permanent commitment to the eccentric residence, it’s also available for sale again, this time for a little under $40 million.

Located in the ritzy gated subdivision of Princeton Estates within Woodfield Country Club, the home appears, on exterior view, to be just another unassuming pan-Mediterranean mega-mansion. The idiosyncratically and whimsically jazzed-up interiors, however, suggest a completely different orbit.

Measuring in at almost 20,000 square feet (27,226 square feet if garage space is included), the sprawling residence has nine bedrooms, 16 bathrooms and an extravaganza of “Star Trek” and fantasy-inspired interior décor. Highlights include a movie theater with a vibrating floor modeled after Captain Picard’s bridge in “The Next Generation” and an arcade that houses a variety of pinball machines, foosball and air hockey tables and a number of “Star Trek” spacecraft miniatures.

Not everything is “Star Trek”-themed: other quirky rooms include a video-game lounge designed to resemble a World War II bunker (there’s camouflage netting on the ceiling), a fairytale-themed child’s bedroom and another done up as a pirate island.

Unfortunately for Trekkies, most of the unique memorabilia, including an original pair of prosthetic Spock ears worn by Leonard Nimoy, will be removed. The movie theater, however, will remain intact, and though Scotty may not be able to beam you up, there is a helipad for dramatic comings and goings.

The Federal Reserve is likely to hike interest rates again. What that means for you
Patrick Mahomes is quietly building a multimillion-dollar real estate empire
Julia Fox claims mice-filled home will stop son from turning into a ‘f–king prick’
Luxury developers in Los Angeles bet someone will pay record prices for these condos
This tiny castle is free for anyone who can move it