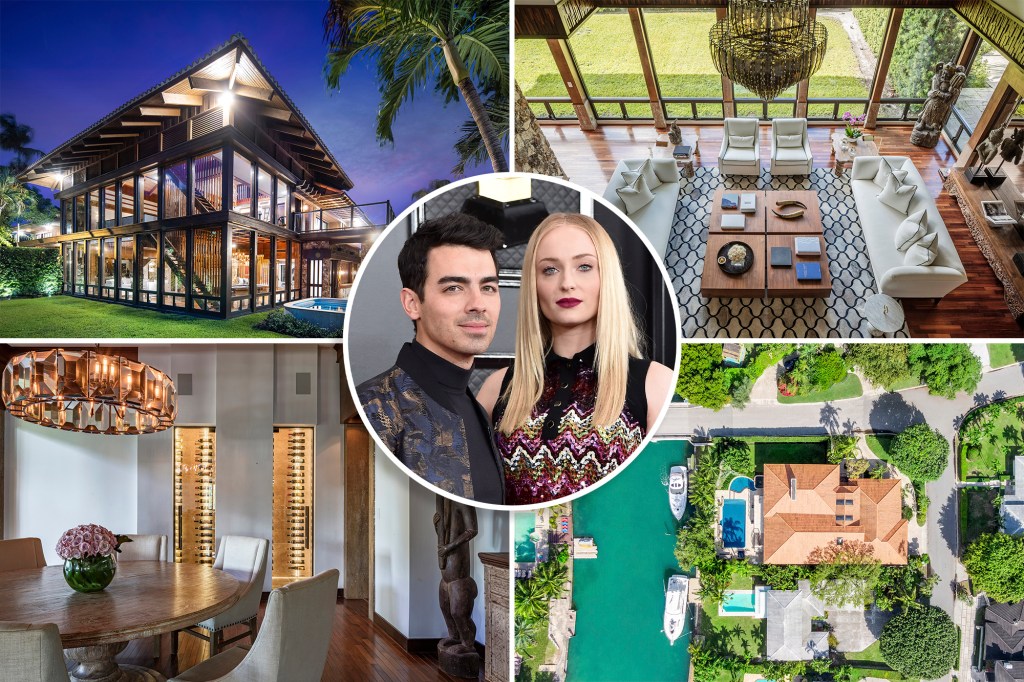 Joe Jonas is downsizing in Miami to the tune of $4.2 million in savings, The Post can exclusively reveal.

Jonas, 32, and his wife Sophie Turner, 25 closed on their Encino, Los Angeles mansion sale for $15.2 million yesterday after snatching up a new $11 million Miami mansion last week, according to Realtor.com.

The $4.2 million savings is not only due to location; it’s also due to size.

The new Miami pad is 10,416 square feet compared to the 12,988-square-foot mansion in Los Angeles, meaning the Hollywood couple has reduced their living space from nine bedrooms to six and 11 bathrooms to nine.

In addition, their LA home was on a 0.89-acre lot compared to the 0.37-acre lot they now call home, according to Realtor.com listings.

A representative for Jonas did not respond to The Post’s request for comment.

The new buyer, whoever that may be (records have not yet been released) — are sure to enjoy the a lap pool, putting green and outdoor projector.

The house also has a two-bedroom guest house, an aquarium, a cigar humidor, a “kegerator,” a fog machine, disco lights and a DJ station, The Post reported when he listed the house in June.

Jonas and Turner also have their Manhattan home on and off the market, most recently asking $5.4 million, according to Realtor.com.

The 32-year-old Jonas Brother and the 25-year-old “Game of Thrones” actress married in 2019 and share a one-year-old daughter Willa.

Joe Jonas first rose to fame from 2005 to 2008 with musical and television hits like “A Little Bit Longer” and “Camp Rock” alongside his brothers Nick Jonas, 29, and Kevin Jonas, 33.

‘Full House’ creator’s Manson murder mansion gets $25M price cut
What is a ‘rolling recession’ and how does it affect consumers? Economic experts explain
Rent prices have dropped the most in these 5 U.S. metro areas. Why it’s cheaper to rent in many markets
New York AG will seek sanctions on Trump, lawyers over ‘false’ court filings in fraud suit
London’s luxury home sellers turn to WhatsApp as private sales surge