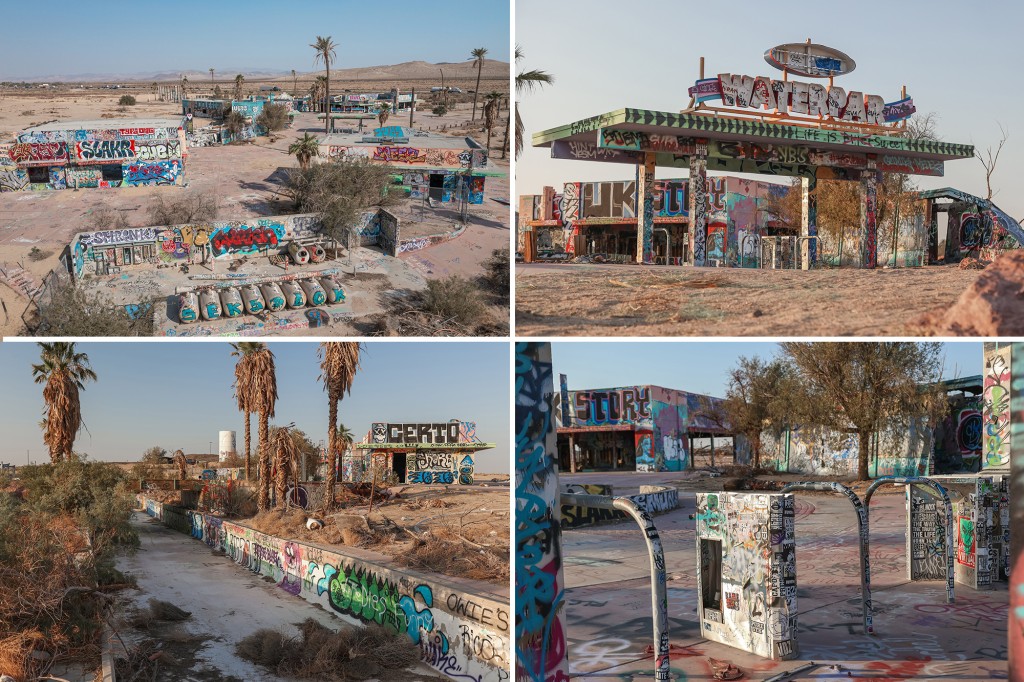 Can this eerie, thrice-closed abandoned park sell for $11 million?

It has been almost two decades since the Mojave Desert, California park was abandoned in 2004 after three attempted launches and closures over the past 60 years.

“I’ve visited the park several times over the years since it was first abandoned, and each time it is slightly more decayed and weather-beaten – not to mention covered in spray paint,” said the Nevada photographer Shaun, who took the photos in mid-September and asked his last name not be used.

“A large waterpark sitting abandoned in the arid Mojave Desert is an incredibly surreal scene, and it’s great to see people turn it into essentially a playground and guerrilla art gallery for those others who are willing to hop the fence and explore it,” he said.

The abandoned aesthetic made it an attractive filming location and it was featured in “Top Gear” Season 5 in 2014 and a Tony Hawk commercial in 2015.

The 251-acre Mojave Desert park with was first built in 1962 by local businessman Bob Byers (property records name him John Byers). He named it after his wife, Dolores — Lake Dolores Waterpark.

It had waterslides, zip lines, a lazy river, bumper boats and a Go-Kart track. Legal and financial troubles shuttered the park in the 1980s, according to Jam Press.

It re-opened as “Rock-a-Hoola” in 1998 with the world’s largest family raft ride at the time, they claimed, but a former employee was paralyzed in a serious accident resulting in a $4.4 million judgment against the park, and investors declared bankruptcy, according to Jam Press.

It last opened in 2002 as Discovery Waterpark for only two years. When it closed in 2004, slides were sold off to other parks while other structures were left to crumble, according to Jam Press.

It has since traded hands twice between investors, last selling for $1.5 million in 2013 — and the owner seemed to be set on reviving the property.

“Problems? We have no issues here. The resort is still in the planning stages and leadership being looked into very closely. Be ready…” Lake Dolores staff wrote on Facebook in September 2016. In March 2019, they wrote, “We will once again rise above the tiny grains of sand, and once again become the oasis in the middle of the desert.”

“It is so damaged it’s hard to imagine making any functional use of the structures and remains of the old waterpark that are still standing,” said Shaun.

Now, the seller’s dreams have one last chance in the form of proposed plans, which are a development option for the buyer, though the buyer would have permission to develop the property for any commercial use, according to Realtor.com.

“It [could become] some fancy development like the owner is hoping for with listing it for sale, or eventually [it could] just revert to [a] massive lot of sand like much of the other parcels out here,” said Shaun.

“The state of decay is part of the whole thing, and knowing it won’t exist forever… just makes it something to appreciate if you can catch it in the window of time that it exists in this state.”

Listing broker Samina Mahud did not respond to The Post’s request for comment.

Check out THESE AMAZING BENEFITS of an LLC #shortsvideo #shortsfeed #realestateinvesting
One of Frank Lloyd Wright’s final designs hits market for $4.2M in CA
BANNED! Why they’re coming after natural gas stoves
This is an ABSOLUTE disaster, WEF forces collapse of economies | Redacted with Clayton Morris
Wild swings in mortgage rates last week caused a rare surge in refinancing