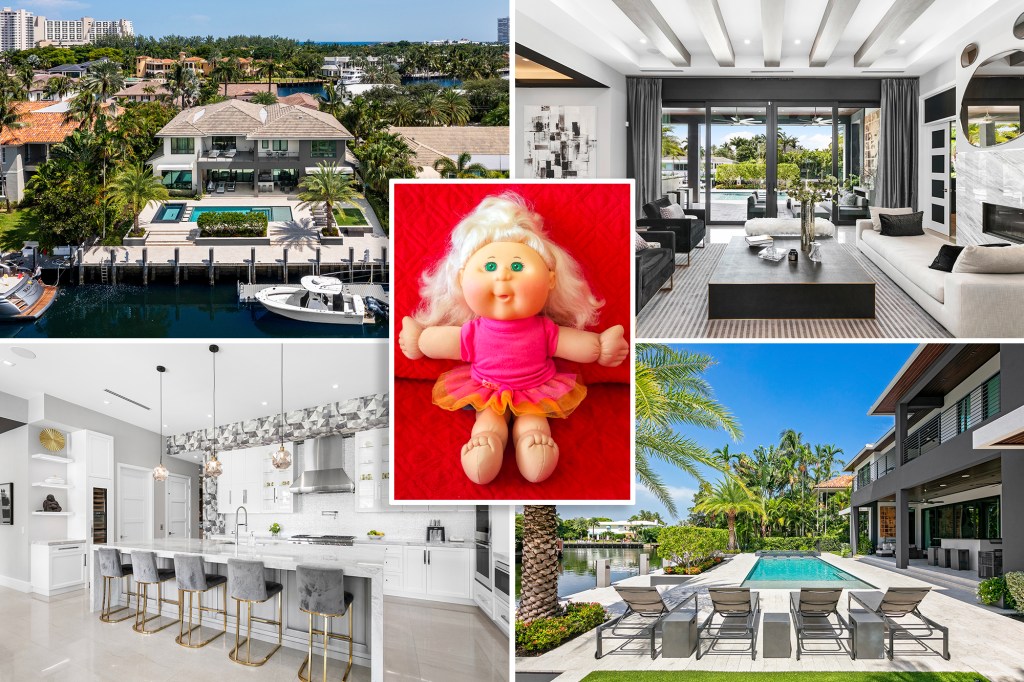 Each Cabbage Patch Kid doll is unique — and so is the $12.75 million Fort Lauderdale mansion of their manufacturer.

Searching for an even larger abode, toy manufacturer Michael Rinzler is has put his 6,349-square-foot mansion up for sale, The Post can exclusively reveal.

“With the well-designed spaces, tranquil vibes and prime waterfront location, I have no doubt this home will attract multiple offers,” listing broker Chad Carroll of Compass told The Post.

The toymaker purchased the five-bedroom, six-and-a-half bathroom home for $6.25 million in December 2019, two months after a larger company acquired his Wicked Cool Toys company in October 2019.

He was co-founder and co-president of Wicked Cool Toys, which started making Pokémon toys in 2017 and became the “master toy partner” for the Cabbage Patch Kids in a 2015 agreement.

Contrasting his colorful profession, the 2018 home is contemporary with black, grey and white accents. It has floor-to-ceiling windows, iron railings and minimalist light fixtures.

He’s not the first creative to prefer a minimalist home design, although another Cabbage Patch mogul marketed his New York City penthouse with a more colorful design this spring.

Inside, there are two beamed-ceiling living rooms, a dining room and two offices — one of which has a pop of color that can’t be missed. Shelves are filled with action figures, plush toys and games in the listing photo.

The kitchen has a large marble island, an industrial hood, dual ovens, black-and-white accent tiles and a breakfast nook.

“The water-facing kitchen with an entertainment island is easily one of the best spaces in the home,” said Carroll.

Amenities include a club room, a loft, an elevator, a gym and a movie theatre, said Carroll.

“This property has everything you need to enjoy the ultimate South Florida lifestyle,” said Carroll.

The 0.29-acre lot has a heated saltwater pool, summer kitchen with bar and a dock to park your boat, said Carroll.

Toymakers including Hasbro, Mattel, Toys “R” Us and now Jazwares have mass-produced less expensive versions of the toy since it was first invented in 1982 and rose to riot-worthy popularity in 1983.

But the brand still creates its pricey hand-stitched dolls at a visitor-friendly “hospital” in Cleveland, Georgia called Babyland General, where buyers can watch dolls being made and receive a “birth certificate” and “adoption papers” for their dolls.