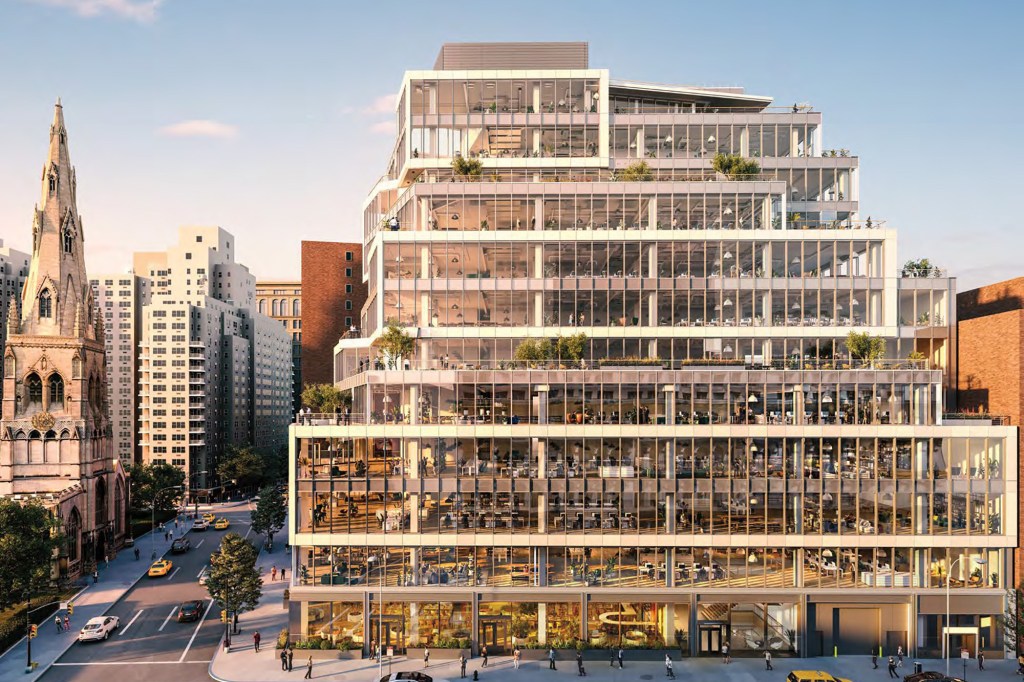 The first lease has been signed at Columbia Property Trust’s 799 Broadway at 11th Street, a milestone in a six-year effort to establish a 12-story boutique office building in the heart of Greenwich Village.

Terms were not released but sources said asking rents at 799 Broadway range from $150 to $220 per square foot. The mini-tower comprises 182,000 square feet.

The building, to open in about a month, makes an arresting sight across from historic Grace Church. Architects Perkins & Will devised a stack of overlapping, interlocked horizontal boxes with a facade of white metal panels and clear-glass windows.

Paul Teti, executive vice president of Columbia’s national real estate operations, said of tenant prospects, “We’ve had interest across the board, but generally forward-looking companies concerned for their employees’ environment and well-being.” Many are tech-driven financial firms, he said.

Mitchell Konsker, leader of a JLL leasing team, said the project was “designed from the inside out” to create the best possible office experience.

The goal was to prioritize employee health and wellness through the use of UV light-sanitation and bipolar ionization to ensure optimum air purification. Tenants will have abundant outdoor space on 17,000 square feet of private terraces on every floor above the third and in a communal garden. Tenant amenities include a gym, lounge and bike room.

Those features, plus floorplates of 10,000 to 22,000 square feet and 15-foot-high slab-to-slab ceilings, are drawing attention from prospective boutique-scale tenants “who are also looking at One Vanderbilt, 425 Park Avenue and the Seagram Building,” Konsker said.

The land was previously owned by Normandy Real Estate Management, which merged with Columbia Property Trust in 2016. Two years later, they razed a funky old building on the site that was “filled with small psychiatrists’ and therapists’ offices,” Konsker said. Columbia acquired 100 percent of Normandy in 2020.

Despite a challenged leasing market, Teti brushed off fears that everyone will one day work from home. “Our offices are a lot nicer than people’s apartments,” he chuckled.

Gary Barnett’s company has landed a mammoth new outpost of Brooklyn Fare Kitchen & Market for 25,500 square feet to span two floors at the tower’s base. It’s due to open in mid-2022.

The gustatory emporium will be Brooklyn Fare’s fifth and largest city location and boast an all-glass storefront, 20-foot ceilings and more than 80 feet of frontage. The market will offer a huge variety of prepared foods, a deli, sushi, a coffee bar and groceries.

The store will have the address of 227 Cherry St.

Like the other Brooklyn Fare markets, it carries the prestige of the company’s three-Michelin-star Chefs Table at Brooklyn Fare Restaurant on West 37th Street.

But as One Manhattan Square owners are paying from $1.3 million to over $5 million for apartments, the product line is guaranteed to be more upmarket than it was at a PathMark supermarket that occupied the site years ago and primarily served residents of nearby low-income housing projects.

A Brooklyn Fare brochure says its goal “is to merge the gourmet with the familiar, providing fresh, delicious groceries and prepared foods at approachable prices, with the perks and services of an old-school neighborhood grocer.”

Extell hasn’t had the easiest time at One Manhattan Square. The tower boasts great river views and 100,000 square feet of resident amenities. A brochure calls it “the coolest place you’ll ever live.”

But it’s in a funky Lower East Side location. Sales took a beating from the pandemic. It has yet to sell its 814 units six years after marketing began, despite price cuts and temporary common-charge waivers.

A recent sales uptick is good news for Barnett.

A big-name, on-site venue to shop and eat in a neighborhood with few walking-distance options might provide the extra juice it needed.

Inflation Reduction Act extends ‘pass-through’ tax break limits for 2 more years. Here’s what that means for entrepreneurs
Protest planned to save historic NYC hospital from wrecking ball
North Korea issues a major warning and we should all pay attention | Redacted with Clayton Morris
How To Buy Your First Rental Property (Step by Step)
Consumer confidence in the housing market hits the lowest point in over a decade