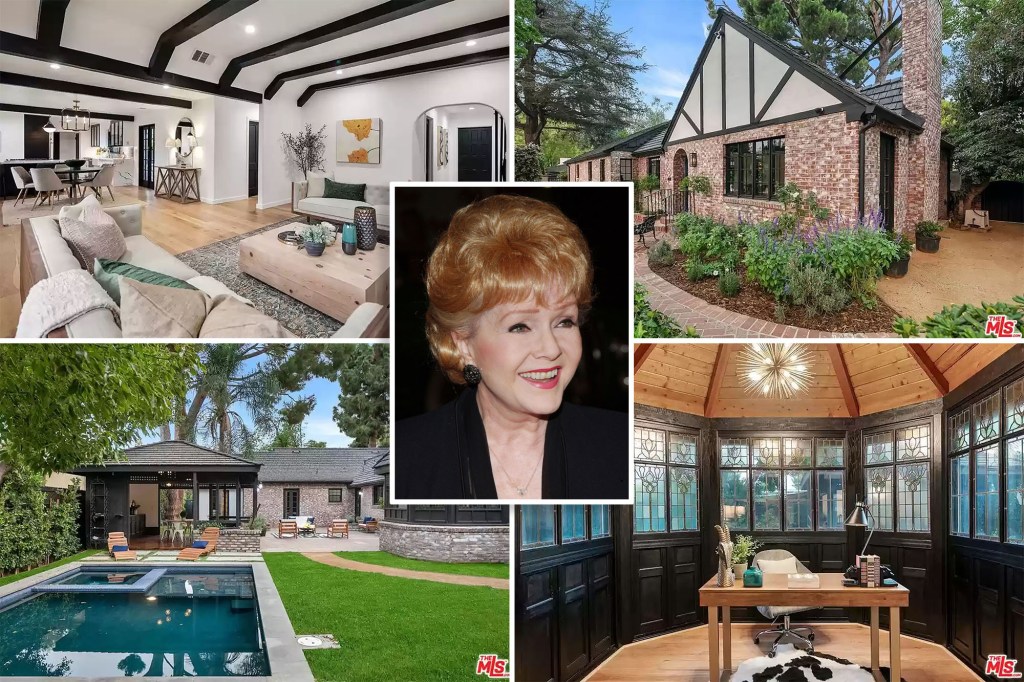 Five years after her death, Debbie Reynolds’ former Los Angeles home has been listed for $2.1 million.

“The architecture embodies what I love about Los Angeles architecture of the era. Style, character and craftsmanship. This home has a very European look with aspects of a proper Tudor estate and an English garden cottage combined. It hits all the right notes,” listing broker Greg Holcomb with Douglas Elliman, Pasadena, told The Post.

The property’s most special feature is an “elevated mini-turret” off the primary bedroom. Vintage stained glass windows create a unique space that Reynolds is said to have used as a salon, according to Holcomb.

“I think my most favorite thing about the house is a raised circular enclave in the primary bedroom suite. I have been told that is where Debbie kept her piano and used the room as a salon to entertain friends,” Holcomb told The Post.

The 1929-built house has been updated with a modern kitchen and bathrooms while maintaining the English country garden style.

“The home has the unique pedigree of original architecture, Hollywood history and an aesthetic that is very beautiful,” Holcomb said.

The 0.2-acre lot has mature pine trees, a brick patio, a cabana, a saltwater swimming pool, a bocce court and a lemon tree orchard. Private gardens have white roses and lavender.

“Something I love about the property is that it has the features of a large mansion, but scaled down for manageable living,” Holcomb said.

Reynolds had not lived in the house for 15 years before her passing, instead living at an $18 million compound with her daughter, “Star Wars” actress Carrie Fisher, who died of a heart attack she had on a plane. Fuller and Bryan renovated the house during their time there.

Reynolds died in 2016 of a stroke the day after her daughter passed. She also had a son, Todd Fisher, with her ex-husband, Eddie Fisher.

Reynolds’ granddaughter, Billie Lourd recently opened up, about the “brutal” loss grieving her mother and grandmother, who were featured in an HBO documentary together soon after their deaths.

In Reynolds’ later years, she was known for roles in the 1973 film “Charlotte’s Web,” 1998 movies “Kiki’s Delivery Service” and “Halloweentown,” and the NBC comedy “Will & Grace.”

Upon her death, her estate sold off many of her other valuable assets, including a Norman Rockwell painting and other memorabilia. Her dance studio has been turned into a museum, and her childhood home sold for $749,000 in 2017.

Mortgage demand took a big step back last week, even after interest rates fell further
New York AG will seek sanctions on Trump, lawyers over ‘false’ court filings in fraud suit
Mortgage rates drop to the 5% range for the first time since September
Patrick Mahomes is quietly building a multimillion-dollar real estate empire
London’s rental market is in crisis. Here’s why and how renters are struggling