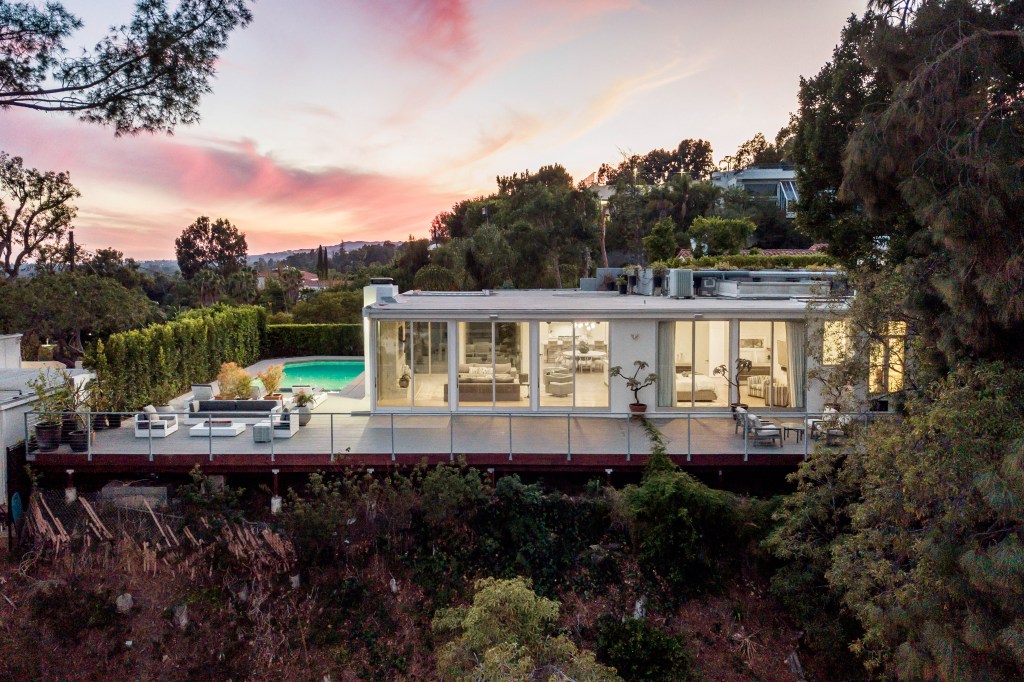 To say Emma Chamberlain has been busy over the past year would be a grandiose understatement. Despite the pandemic, the famously irreverent YouTuber still managed to produce dozens of videos and ink campaign deals with the likes of Levi’s and Louis Vuitton. She also bought a striking West Hollywood mansion that’s already been sold off for a profit, and later acquired a $4.3 million Benedict Canyon home. A full-scale renovation is underway on the latter property — a dated, idiosyncratic compound once owned by both R&B legend Natalie Cole and actor Barry Bostwick.

While she waits for construction to finish, Chamberlain is renting a mid-century home above the Sunset Strip, paying $35,000 a month for what’s described in listings as “a modern showcase property.” The Hollywood Hills pad is cool in a low-slung, perfectly vintage-meets-contemporary manner, with a pool, firepit, walls of glass and a wine fridge, though Chamberlain’s is stocked with energy drinks and water. Which is not to say she’ll never have a glass of wine — the lack of bottles is only because the Bay Area native can’t yet legally purchase alcohol.

Chamberlain, 20, is just one member of a growing crop of ultra-young influencers and Hollywood stars snapping up high-end real estate at an unprecedented pace — much to the surprise and delight of Los Angeles Realtors, who almost uniformly say their current buyer pools are younger, richer and savvier than ever before. The rise of internet celebs and their rapid paths to fame and fortune are largely to thank, but even traditional young Hollywood — musicians, actors, up-and-coming producers — have reaped the fiscal benefits of an increasingly online entertainment industry.

Although social media as we know it today got its start in the late ’90s and early 2000s, it wasn’t until the more recent advent of Instagram and TikTok that viable, bankable internet celebrities really began being minted. Today, social media has put celebrity capital at an all-time high and influencing can be a lucrative career, with brand partnerships and ad revenue from YouTube videos raking in millions for top stars.

Tana Mongeau, a major influencer who first achieved notoriety on YouTube for her oft-explicit “storytime” videos, made waves in early July, when she announced to her millions of followers that she’d purchased the home of fellow YouTube superstar David Dobrik. A few weeks later, Mongeau walked back that too-hasty remark, clarifying she had declined to purchase after discovering the property required the installation of “$400,000 stilts” and is infested with cockroaches and “rats the size of Chihuahuas.”

Dobrik, who turned 25 in July and sports more than 50 million followers across YouTube, TikTok and Instagram, has already upgraded to a $9.5 million Sherman Oaks mansion, a flashy contemporary structure complete with an infinity pool and basketball court.

But Realtors say many young stars aren’t necessarily looking to flash; they’d prefer to maximize their cash-out potential by buying unattractive homes located either in a desirable area, or set on a big piece of property with loads of potential. Zendaya, the “Euphoria” and “Spider-Man” star with 102 million Instagram followers, bought a $4 million Encino estate in 2019. The 4-acre property is one of the largest in its neighborhood, and the nondescript 1930s house could be a teardown, with the lot potentially subdivided into two or three parcels. But the 24-year-old would rather be a landlord for now, and she quickly put the estate up for rent at $18,000 per month.

Finneas, the Grammy-winning record producer and older brother of Billie Eilish, has bought three L.A. homes since 2018, including an oceanfront Malibu cottage snapped up for $5.2 million in 2020. At barely 1,200 sq.-ft., the house is petite, but the hefty value hails from its location on Las Flores, one of Malibu’s most desirable beaches. Prices in the area have shot up more than 20% over the past year, according to Zillow.

But the most prolific young real estate whale is Kylie Jenner, arguably social media’s biggest star. The reality TV veteran bought her first home at 17, with the help of her mother. Since then, she’s bought eight multimillion-dollar properties across Southern California, from the San Fernando Valley to Palm Desert. In early 2020, following the $600 million sale of a majority stake in her Kylie Cosmetics empire, the 23-year-old reinvested a chunk of her winnings into a $15 million vacant lot in Hidden Hills and a $36.5 million estate in the exclusive Holmby Hills neighborhood.

On the whole, according to real estate insiders, young Hollywood is as wary of stock market fluctuations and cryptocurrency risks as much as the average buyer, favoring real estate as a safe haven. Home purchases can even be morphed into a nifty tax benefit and income stream for content creators, as virtual home tours rack up millions of views.

Buyers including Chamberlain and Mongeau, who film a majority of their content at home, require big windows for plenty of natural light. An open floorplan, high ceilings and large closets are key. For security, gated properties are a must.

And though the ideological divide between the baby boomer and the millennial/Gen-Z generations continues to widen, real estate remains a cross-demographic top priority.

“Having my own house … has always been a huge dream of mine,” Chamberlain says.