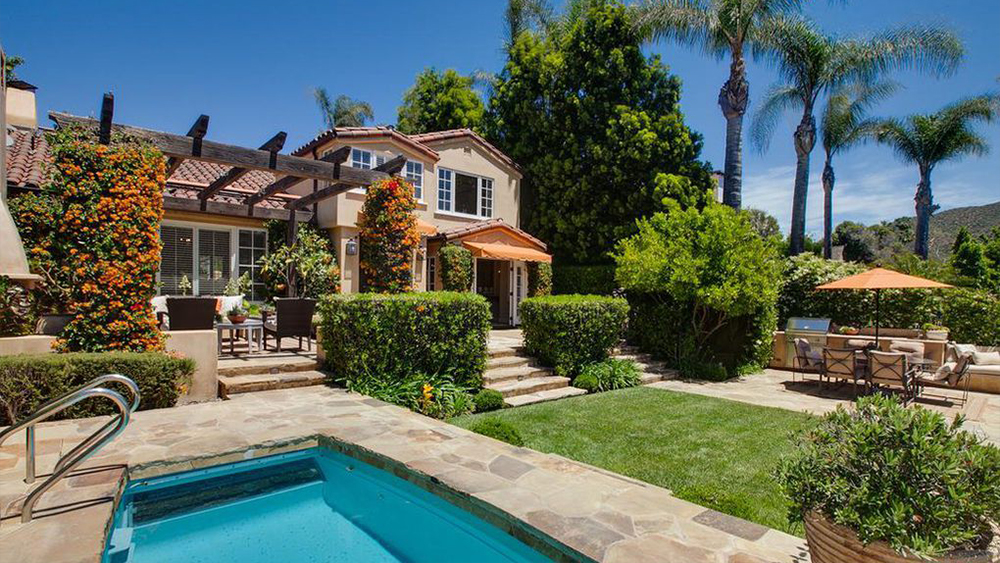 UPDATE: A showbiz-pedigreed property in L.A.’s celeb-studded Toluca Lake community, once home to Walt Disney’s late nephew Roy E. Disney and now owned by the former Disney executive’s surviving wife, came up for sale about two months ago at almost $5 million. Listed with Jennifer Hughes at Bulldog Realtors, the lakefront property is now in escrow for an unknown amount. Built in the mid-1930s and previously owned by Boris Karloff and Oscar-winning composer Erich Wolfgang Korngold, the humbly proportioned if hardly inexpensive Mediterranean contains three bedrooms and three bathrooms in a skosh less than 2,500 square feet. Unsubstantiated scuttlebutt ran rife on the celebrity real estate street that the next owner will be six-time Emmy winning “Breaking Bad” star Bryan Cranston. However, this report was updated after someone in a position to know confirmed the buyer is definitely not Cranston.

Mature olive trees shade a walled courtyard entrance; the living room is dominated by a baronial, stone fireplace under a wood-beamed cathedral ceiling; and a separate dining room is informally open to an up-to-date kitchen with high-end appointments. There are two guest bedrooms plus a paneled office with dual built-in workstations on the main floor. The upper level, accessible via colorfully tile-accented stairs or elevator, is devoted to a master suite that comprises a cozy bedroom and separate study. Outside, a broad terrace with built-in barbecue and outdoor fireplace overlooks a wee patch of grass, a plunge-sized swimming pool and a lakeside lounging deck with a small dock for a boat that can putter around the six-acre lake.

Mortgage rates drop to the 5% range for the first time since September
This tiny castle is free for anyone who can move it
China’s real estate crisis isn’t over yet, IMF says
I found a great apartment — but the landlord charges fees for a pet fish
Here’s what the Federal Reserve’s 25 basis point interest rate hike means for your money