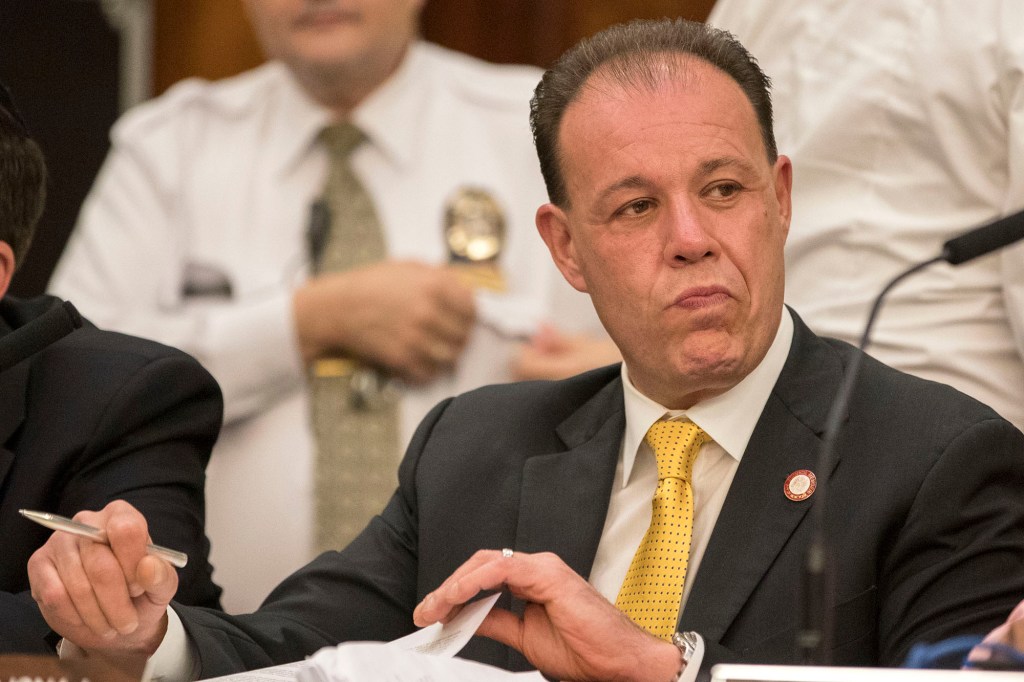 A Bronx councilman helped steer a proposed homeless shelter away from a building his family owns, and now supports two shelters that many in the neighborhood say don’t belong.

Two men’s shelters with 200 beds each are planned for 1374 Blondell Ave. and 2443 Poplar St. in the borough’s working-class Westchester Square section.

Earlier this year, Councilman Mark Gjonaj and the local community board put the kibosh on plans for a shelter of the same size at 1682 Stillwell Ave., in adjacent Morris Park and around the corner from 2100 Eastchester Rd. — a 70-unit apartment building owned by the Gjonaj family.

The Democrat pol’s chief of staff told the Bronx Times he rejected the proposal because the “community [was] just against that location.”

Paperwork for the Gjonaj building, 2100 Eastchester Rd.., lists a $7.65 million mortgage; the limited liability company that owns it shares the headquarters of several Gjonaj family real-estate businesses and the councilman’s old non-profit, the Albanian-American Community Association. The mortgage documentation is signed by Paul Gjonaj, the councilman’s brother.

“Stillwell’s just a bad location. It just didn’t make sense,” D’Angelo told The Post. He said he was “not aware of” the Gjonaj’s family’s ownership of the nearby building.

Gjonaj’s chief of staff, Reginald Johnson, told The Post in a statement: “The community presented a detailed list of concerns about the original site. The councilman stood with the community and supported their position. Any suggestion to the contrary is irresponsible and intentionally false.”

Sandi Lusk, 65, a longtime community activist and founder of the Westchester Square-Zerega Improvement Organization, told The Post her group opposes the shelters because “400 beds in one community is too much.” The two sites are just a 10-minute walk apart.

The Poplar site is also across the street from the playground of a school for disabled children run by Easter Seals. the Blondell site would reportedly cost a startling $360 million due to required environmental remediation, she added. The Department of Social Services didn’t return a request for comment on the cost.

The neighborhood “has gone through some very tough times,” Lusk said. “It’s going to overwhelm and destroy the area.”

D’Angelo, the community board chairman, said the Bronx has been “inundated” with more than its fair share of shelters — and that he’s against the Poplar and Blondell sites as well. If they can’t be canceled by the next mayor, “I would like the sites to be more family oriented rather than single men,” he said.

Gjonaj has been accused of ethical lapses in the past.

In 2020, the Bronx district attorney investigated whether he misused campaign money for his own benefit and co-mingled funds between his committee and his Albanian group. The Bronx DA didn’t return a request for comment on the probe’s status.

In 2019, the City Council requested a review of whether he used taxpayer dollars to hire campaign donors to renovate his district office. In 2018, he steered $130,000 in city funds to his nonprofit. In 2017, his opponent accused him of using public-housing space as a de-facto campaign office.

A rep for the city Conflicts of Interest Board said that “confidentiality restrictions … prohibit the Board from disclosing whether it has received a complaint, is pursuing an investigation of a matter, or has initiated an enforcement action against a public servant.”

New York AG will seek sanctions on Trump, lawyers over ‘false’ court filings in fraud suit
Julia Fox claims mice-filled home will stop son from turning into a ‘f–king prick’
The Federal Reserve is likely to hike interest rates again. What that means for you
Patrick Mahomes is quietly building a multimillion-dollar real estate empire
Luxury developers in Los Angeles bet someone will pay record prices for these condos