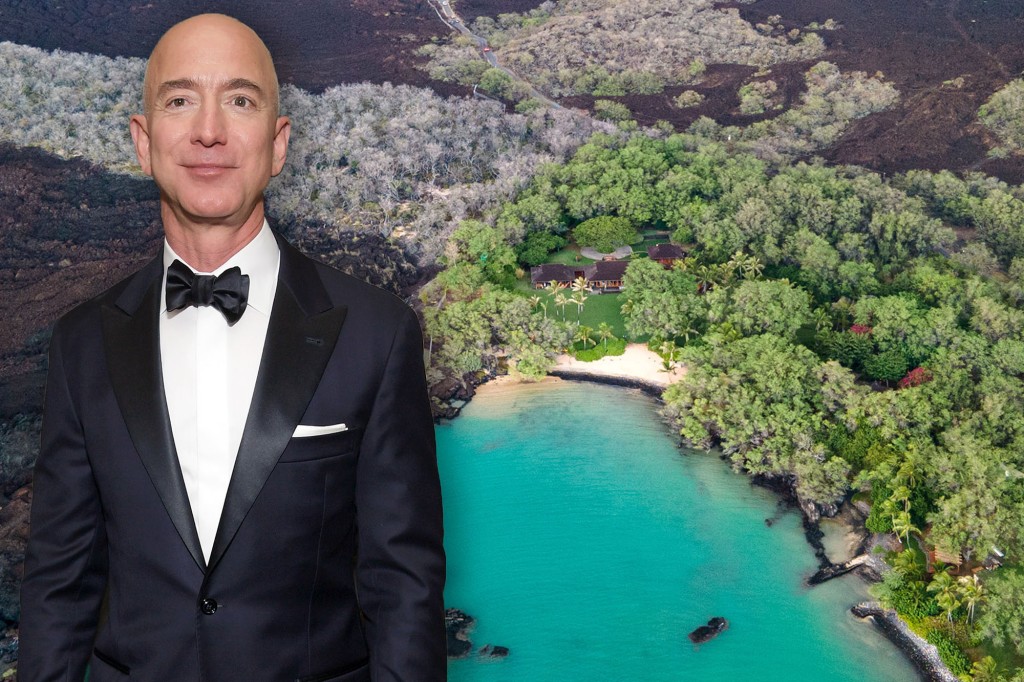 Jeff Bezos just shelled out $78 million for a massive Hawaiian estate spanning over 14 acres, The Post can confirm.

But the Amazon founder has only hit the tip of the iceberg when it comes to investing in the Aloha State — which has locals worried.

Bezos had also been hoping to find a four-bedroom penthouse in Montage Kapalua Bay — a rarity at the luxury resort where he often stays — for his parents, located on the other side of the Maui island from the estate he purchased in June.

The entrepreneur-turned-astronaut purchased three different structures on his own private bay, with additional acreage under the Lochland Holdings LLC, property records reveal.

Bezos purchased the LLC from the Schatz family, the previous owners of the estate. Doug Schatz, a Colorado-based energy businessman, bought the property in 1996 for $4.2 million, and in the following years, he spent a few million more to buy the neighboring land.

Facebook CEO Mark Zuckerberg, who currently owns more than 1,300 acres of land on the island of Kauai, has reportedly spent over $100 million for his real estate transactions on the island.

Locals told The Post they have mixed feelings about tech moguls taking over the island.

“It is tough being born and raised here, seeing these real estate transactions and how it can drive up prices,” one source said. “On the island, an average home now costs 1 million — way above what most blue-collar workers can afford, so I always struggle with that.”

But on the other hand, the source mused that some of these “big-money” investors have really helped Hawaii, including Larry Ellison, who purchased 98% of Lanai in 2012 and moved to the island full time in December.

“On the other side of the coin you have Ellison — he improved so much of the infrastructure, like the Pineapple Plantation, located in Honolulu,” the insider said. “You had parks deteriorating, infrastructure was in decay and he brought it back to life essentially.

“It’s hard to know what Bezos’ intentions are this early on,” the source added.

According to Pacific Business News, Bezos and his partner, Lauren Sanchez, “want to be a part of supporting the local community” and have donated to several charities in Maui, including Friends of the Children’s Justice Center of Maui, Malama Family Recovery Center, the Maui Farm, Ka Hale A Ke Ola Homeless Resource Centers and Habitat for Humanity Maui.

Anthony Sayles, a Hawaiian native and a real estate agent with Coldwell Banker Island Properties, revealed the bay property Bezos purchased was once a place he frequented when he was a young kid in elementary school, describing the space as “very unique.”

“At that time, it was rustic. It has since seen several renovations. Having your own private bay, it is something like out of ‘Gilligan’s Island,’” Sayles said.

“It’s very private from car access, so you can’t see the house if you’re driving by. It’s barricaded. You have to pass through several gates to get in and there is around-the-clock security.”

Sayles explained that the bay is considered a marine fishing reserve area, which means individuals are not allowed to do any commercial operations there, including fishing.

The estate is also surrounded by thousands of acres of dormant lava fields where the Haleakalā volcano erupted over 400 years ago.

“My main memory is the coral floors. It felt like you were outside living ‘Gilligan’s Island’ style,” Sayle reiterated.

Even by Hawaii standards, this oceanfront estate is isolated and remote and is made up of three separate structures.

While $78 million may seem overpriced for the secluded abode, a smaller estate nearby sold for $45 million last summer. At the time, it was known as the second most expensive real estate transaction in the state.

Bezos is now considered the second richest person in the world, with an estimated net worth of $191.4 billion, according to Forbes.

In addition to the $78 million Hawaiian property, he has a $500 million real estate portfolio, with properties in California, Texas, Washington and New York.

Julia Fox claims mice-filled home will stop son from turning into a ‘f–king prick’
‘Full House’ creator’s Manson murder mansion gets $25M price cut
Hong Kong services to rebound as China reopens, but UBP says sector is coming from ‘fragile situation’
Mansion where ‘My Fair Lady’ was written hosts estate sale
The Federal Reserve is likely to hike interest rates again. What that means for you