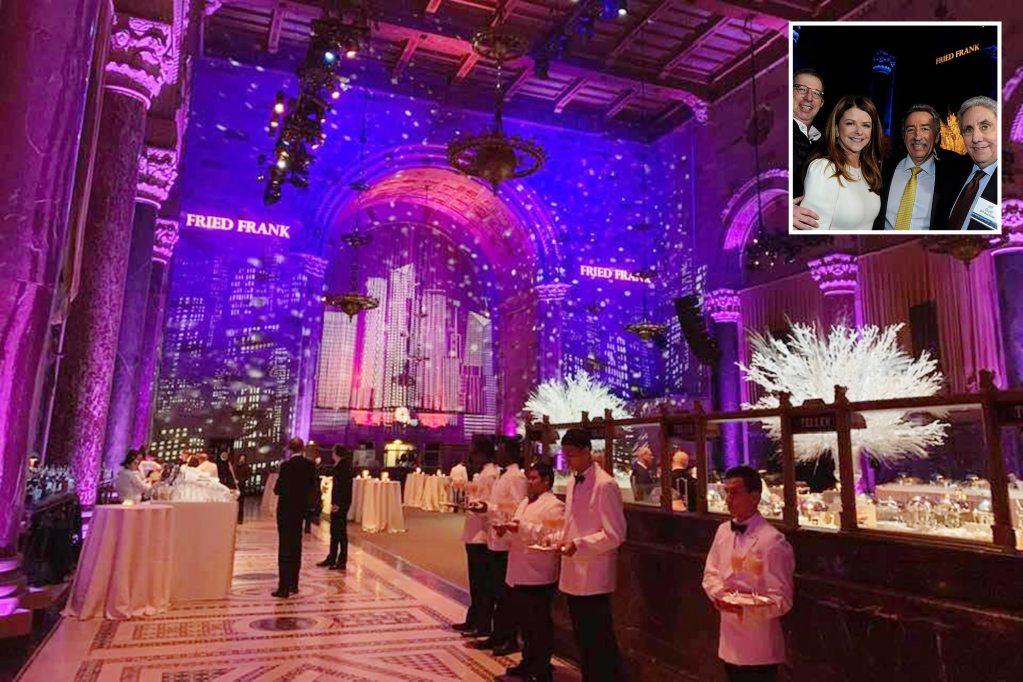 The city’s real estate business is coming back with a vengeance — and with shrimp, sushi,  caviar and champagne.

To the delight of dealmakers and moguls, the annual Fried, Frank holiday party is coming back on Dec. 7 after a year off for the pandemic.

The boozy bash thrown by the law firm’s powerful real estate department and its chairman Jonathan Mechanic has been the property world’s No. 1 celebration since it started 26 years ago at the 21 Club.

“The Fried Frank party is the real estate industry’s equivalent of the Rockefeller Center tree lighting — the official kick-off of the holiday season. And just like Rock Center it feels like the whole world is there, jammed together, full of good cheer,” said tristate CEO Mary Ann Tighe.

“This year we will especially appreciate it because we’ll all be celebrating that our city made it to the other side of the pandemic,” she said.

The event grew so popular that Mechanic moved it to the larger St. Regis Roof and then to immense Cipriani at 110 E. 42nd St. in 2004. We once likened the din raised by 1,300 industry machers in the cavernous banking hall to the roar of an express train.

When the pandemic sidelined the event last year,  Mechanic commissioned a jigsaw puzzle from images of past years’ revels and sold them for charity.

He said of the real thing’s return, “It kicks off the holiday season and of course, year-end deal making. Hosting this event is a reflection of our commitment to the real estate industry and the resurgence of New York City. We are back — albeit with appropriate health and safety protocols in place, including a smaller guest list, requirements for proof of vaccination and COVID testing.”

He wouldn’t say how much smaller but any shrinkage is likely to inflame the frenzy for invitations. Guests won’t have to wear masks although Cipriani staff will.

The event always mirrored the mood of the times — from  post-9/11 gloom to ebullience in years through 2019 when fortunes were made on new developments, giant leases and $1 billion building sales.

Realty Check witnessed many memorable smiles over the years, such as Harry Macklowe’s after Jamestown invested $300 million in his GM Building and Rob Speyer beaming over great reviews for his new Top of the Rock Observation Deck.

There were awkward moments, too, such as Kent Swig dodging reporters when he was besieged by debt and a costly divorce from Macklowe’s daughter, Liz.

After last year’s dark interlude, the show will return — with Mechanic back as ringmaster, greeting everyone arriving at the front of the room.

There’s no end in sight to the city’s residential-construction boom. Despite the alleged “exodus” from the city — much of which turned out to be false — developers are all but tripping over each other to put up new apartment buildings.

Interestingly, very few of them will be of the supertall class that came to define the pre-pandemic boom.

As reported by real estate construction tracker YIMBY, Department of Buildings filings for the second and third quarters of 2021 reveal that 19,052 new residential units are coming in more than 1,000 new buildings. The YIMBY tally counted 45 projects of at least 10 stories, 268 of four to nine stories and 720 of one to three stories.

The site called it a “testament to the industry’s enduring enthusiasm” about the Big Apple market. It said that if all the new projects were “built together as a single cluster, they would comprise something of a small city by themselves, complete with a dozen or more blocks of low-rise houses and a sizable urban core with over 200 mid-rise buildings,” YIMBY said.

From luxury city escapes to vacation rentals: These are Europe’s best destinations to buy a second home
🏡 HOW TO FLIP A HOUSE FOR BEGINNERS IN 2020 (WALK-THROUGH)
Alyson Hannigan’s $18M ‘This is Us’ home, a screen set fave, finds a buyer
Malibu mansion with spa and theater hits market as 8-way timeshare
Real Estate Collapse? You Could Be Wrong