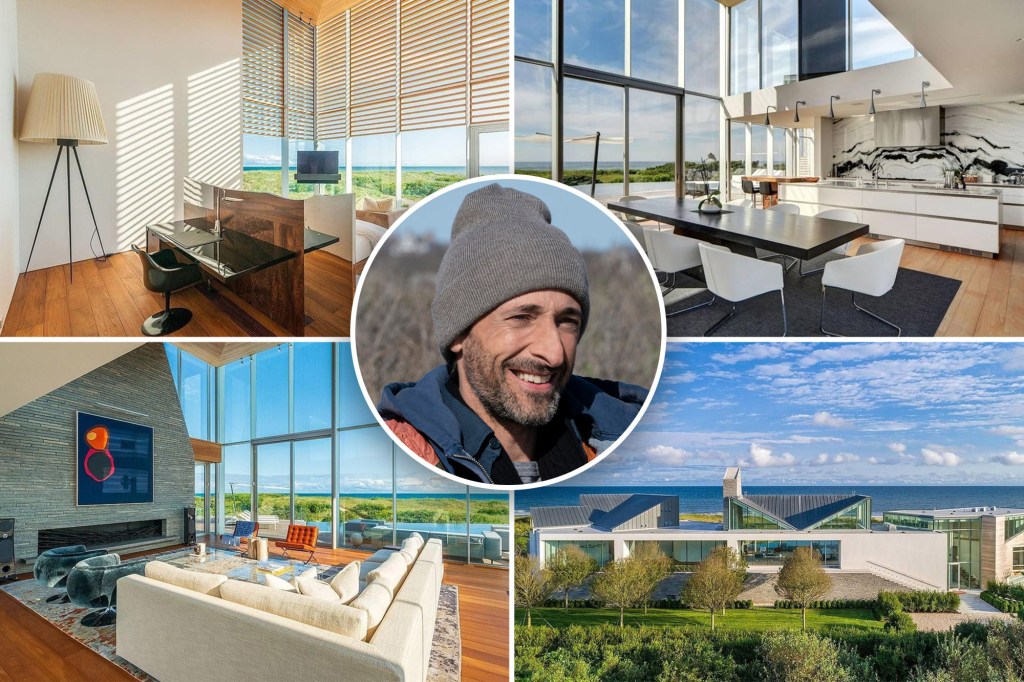 The mansion featured in the latest episode of “Succession” was recently listed for a whopping $52 million before receiving a few price cuts and ultimately being taken back off the market.

The fourth episode in Season 3, “Lion in the Meadow,” saw Kendall Roy (Jeremy Strong) and Logan Roy (Brian Cox) summoned to the island mansion of one of their biggest investors, Josh Aaronson (Adrien Brody).

With the company’s future in peril, the Roys are worried that Aaronson could back out amid their family rift. Brody’s Aaronson fears his 4% stake in Waystar Royco could be at risk as the father and son continue to feud and the investor considers joining their archnemesis instead.

So, to sort it all out, the father-son duo pays a visit to the stunning property for a parley in hopes of displaying a front of unity. With the stockholders’ meeting on the horizon, the Roy men take separate helicopters to Aaronson’s oceanfront getaway.

But in reality, the breathtaking home isn’t exactly on a private island. Rather, it’s situated in the Hamptons in the Montauk neighborhood, adjacent to a public beach with neighboring properties on each side.

Made up of six bedrooms and 11 bathrooms, the property spans 11,000 square feet and sits on over 2 acres of land.

The current owners initially purchased the home in 2015 for $16.5 million, records show.

Located in Wainscott, the home was chosen from among a group of four houses.

Production designer Stephen Carter revealed that finding a home that appeared isolated and connected to the wild proved difficult.

“If you know that Hamptons coast, you know that it’s built up within an inch of its life,” Carter told Architectural Digest. “One of the nice things about this property is that once you get out onto the pool deck, you sense that there might not be too many other buildings close by.”

Filming took place in a day with minimal changes done to the decor, which includes a white sectional sofa and a dining area with six white chrome-and-leather chairs.

Features include a 22-foot-high great room framed by windows to bring in optimal sunlight.

“You’ve got these great views out toward the beach. You have great light coming in. One of the things we try to do on the show is to create [the suggestion of] wealth through an abundance of space, light, and [ceiling] height in every situation,” Carter explained.

Carter said the home, which was built in 2018, reflects the show’s aesthetic.

“You want to feel that these people don’t have the creative wherewithal to connect personally to the things in their lives,” he explained. “They’re not out combing flea markets looking for the perfect midcentury piece. They’re hiring decorators.”

The home was listed last October for $49.5 million, before estate was removed from the market in September — almost one year without any offers.

Interior amenities include a recreational room, a pool bath, a gym, a spa bath with a steam and sauna and a large room housing the golf simulator along with an elevator and a floating staircase.

Outdoors, there are several seaside decks and an “eccentrically shaped” deck and pool with a submerged spa, an outdoor kitchen, dining table and seaside living room.