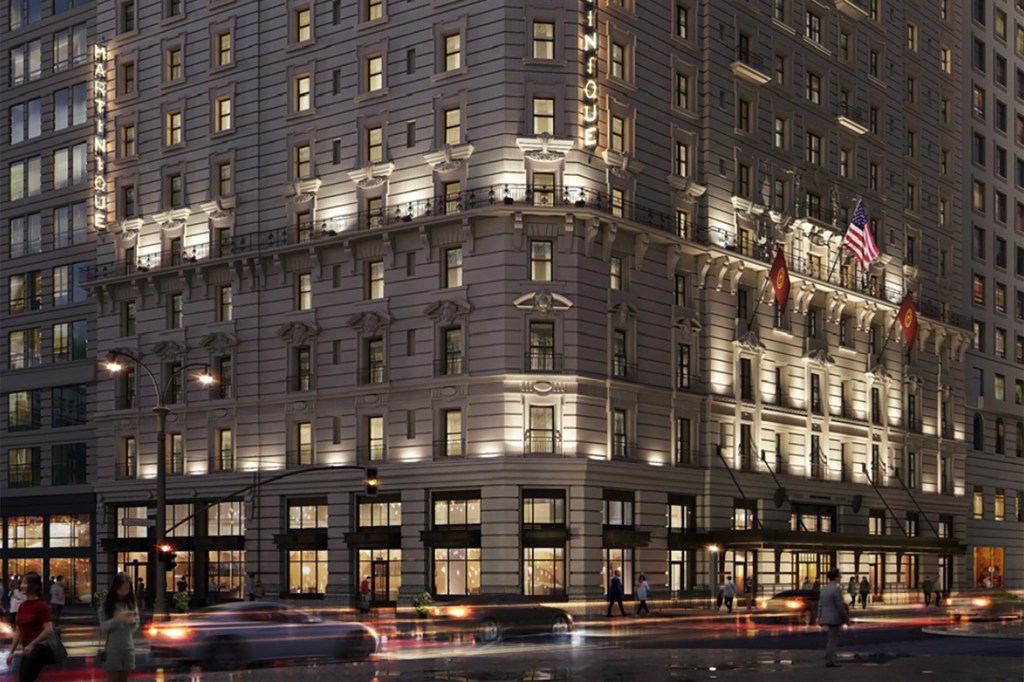 Call it the phoenix of Greeley Square.

The landmarked, but empty and construction-marred Martinique Hotel will soon rise from the ashes, thanks to a just-closed, hard-won leasehold purchase of the long-troubled property at Greeley Square.

The previously bankrupt hotel will reopen in stages starting as early as December, although 12 to 18 months of mostly exterior work lie ahead. It will again be branded as Curio Collection by Hilton, the flag it last carried before the pandemic shut it down.
The rebirth reflects the rising fortunes of the Broadway Nomad-area corridor south of 34th Street, where new Ritz-Carlton and Virgin hotels and hip restaurants such as The Smith have replaced wholesalers and an ugly sidewalk bazaar.

“Turning the lights back on at the Martinique will be a booster shot for Greeley Square and Herald Square,” said a plugged-in Midtown South observer.

The Martinique’s rescue didn’t come easily. The buyer is surprisingly not an overseas investor, but a little-known company in the Midwest — Oklahoma City-based developer Burnett Equity. Burnett closed on the $55 million leasehold purchase last week, sources revealed. Burnett is mostly active in Oklahoma with commercial and residential projects. It’s expected to pump up to $60 million more into the Martinique’s stalled restoration project.

The 1897-vintage Martinique, at 1260 Broadway at West 32nd Street, was believed to be the city’s longest continuously-operating hotel until it closed for the pandemic. At different periods in its history it was a luxury hotel, an SRO and, most recently, a sound destination for middle-market travelers.

We first reported the leasehold offering back in March. Marcus & Millichap brokers Eric Anton and Nelson Lee were tapped by the landowner, a private investor from Florida, in December 2020 to market the bankrupt leasehold, which had 68 years left on it.

The mortgage fell into foreclosure after the leaseholder died in late 2020. Adding to the challenge, the 530-room property also had 34,000 square feet of retail space that was vacant except for a small Chase bank branch. The property’s landmark status meant that the renovation work had to be handled with kid gloves and construction was years behind schedule.

But the toughest obstacle facing a new owner was that the ground lease had “very onerous terms,” a source told us.

“Appraisers told the brokers not to waste their time — the whole ball of wax was worthless,” we’re told.

But Anton and Lee pressed the search for a buyer. “They expected to receive offers from overseas investors who regard New York as cheap. They did, but they were surprised to also hear from Oklahoma City,” an insider related.

Analysts speculated last winter that the leasehold could fetch $70 million to $75 million. But two circumstances resulted in a price cut. The unfinished facade restoration faced more costs to complete than were expected. Plus, the ground lease needed adjusting to make it more finance-able. The parties were able to agree on altered terms after several months of negotiating.

Mission Capital, a division of Marcus & Millichap, stepped in to secure acquisition financing for Burnett Equity.

Meanwhile, retail brokers Danny Volk and Andy Kim were tapped to fill the empty storefronts. Even before the leasehold deal was done, they managed to score leases for yet-to-be-named Korean-themed cafes on the 32nd Street side and an upscale American bistro on Broadway.

The stores and eateries will open over the next year.

An exuberant Anton said, “After a year of working on this complicated deal during the dark days of Covid, I can’t wait to embarrass myself singing karaoke at the new Martinique. It will be the most fun hotel in the city with five restaurants at the crossroads of Koreatown and Nomad.”

Expanding workplace provider Industrious signed a 10-year, 43,874-square-foot partnership agreement with Sapir Organization’s 261 Madison Ave., a midcentury tower two blocks from Grand Central Terminal. It will take over the entire ninth and tenth floors, which were previously part of WeWork.

Landlord CEO Alex Sapir said, “As more companies return to work and look for cutting-edge space near transit hubs, 261 and 260 Madison are poised to play a leading role in Midtown’s office recovery.”

Industrious real estate director Doug Feinberg said that small and mid-sized companies are “looking for solutions to their return-to-work plans” and flex space is the answer for many.

CBRE repped both sides on the deal — Sacha Zarba and Alice Fair for Industrious, and a team led by Peter Turchin and Gregg Rothkin for Sapir.

Lefrak’s 40 W. 57th St. is one of those successful midtown towers that rarely has much available space. The 800,000-square-footer is 97 percent leased after five new and renewal leases totaling 100,000 square feet were just signed.

The largest deal was a 50,000-square-foot renewal for Givaudan, a Swiss manufacturer of flavors, fragrances and “active cosmetic ingredients.”

New leases were signed for A&E Real Estate and Lightyear Capital, while Drasana Capital and Elmwood Asset Management Capital both expanded within the building.
A CBRE team led by Howard Fiddle and Gregg Rothkin repped Lefrak along with a Lefrak in-house team led by Marylou Berk.

New York AG will seek sanctions on Trump, lawyers over ‘false’ court filings in fraud suit
Julia Fox claims mice-filled home will stop son from turning into a ‘f–king prick’
Mortgage demand took a big step back last week, even after interest rates fell further
Seth Rogen to host slumber party at his LA creative retreat
I found a great apartment — but the landlord charges fees for a pet fish