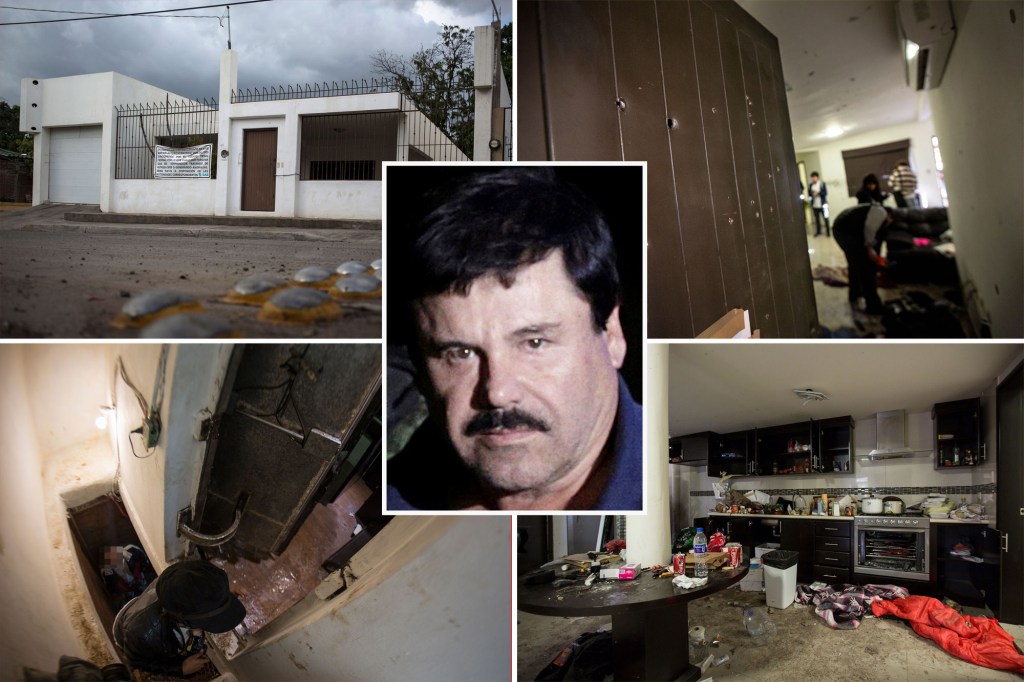 Blood splatters and bullet holes fill the concrete walls and escape tunnels of the hideouts once frequented by one of the world’s most notorious drug kingpins.

And while one remains deserted with a haunted past, the other has taken on a new life.

The first home is in Los Mochis, a city in northern Sinaloa, the Mexican state where Guzmán spent his final days before being captured by Mexican marines and extradited to the United States. The second home in Culiacán, the capital of Sinaloa, was used by Guzmán as a safe house due to its winding escape tunnels.

But for a man with an estimated net worth of $12.6 billion, his houses were pretty destitute for the leader of a global drug-trafficking operation.

Longtime photographer Hans-Maximo Musielik, who has spent time on the scene of both properties, gave The Post an inside look at the derelict refuge used by one of the most dangerous drug traffickers responsible for killing up to 3,000 people in just one year of his nearly three-decade reign.

“Inside the home, everything was a mess,” Musielik told The Post, noting he witnessed “large coagulated pools of blood” firsthand.

While the first home is still abandoned, the second residence has a new owner, Musielik said. An unknown party scored the two-bedroom house in the Mexican National Lottery, but despite the good fortune, the winner is staying anonymous in fear of the cartel.

On Jan. 8, 2016, Guzman was captured by two federal police officers in Los Mochis with his closest bodyguard after they stole a car to escape. Minutes before their arrest, both fled the safe house, located at Jiquilpan 1002 Street, after the special forces of the Mexican Navy Infantry raided the home in an operation called “Black Swan” (Cisne Negro).

Following his arrest, officers chose to take him to a motel room and entrench themselves there until backup arrived.

The two-story home is made up of three bedrooms with a living area on the second floor. There is another large room with what seemed to be a walk-in closet with glass walls. All of the bedrooms had beds in them. The first room on the first floor is believed to be Guzman’s bedroom, due to the proximity to the walk-in closet where a secret entrance was observed.

The photos and videos captured show several signs of the battle that took place that morning between Guzman’s gang and government officials.

While Guzman and his bodyguard escaped from the home, others resisted which bought them some time.

“National and international media were allowed to enter the safe house almost 24 hours after his arrest,” Musielik told The Post, noting that “one could imagine the last stand of some of Guzman’s men” judging by the scene.

The home still remains off the market today with low-level surveillance. Open court cases regarding the house are keeping the home from being sold or auctioned.

In February 2014, Guzman was hiding out in a house in Culiacan, Mexico, but fled through back tunnels and canals as authorities hunted for him. He was caught a few days later in nearby Mazatlan.

That house has since been renovated.

Surveillance cameras that monitored everything around the perimeter of the home were removed, and the hole under a bathtub that connected to underground tunnels was covered up.

Last year, Mexico’s Institute to Return Stolen Goods to the People, known as INDEP, attempted to auction off the house with bidding starting at around $130,000, but there were no offers.

However, he two-bedroom home was raffled off by the government on Sept. 15, 2021, through the Mexican National Lottery. The price of a single lottery ticket was 250 Mexican pesos. Two million tickets were sold, but there are no details about who has come to own it, in fear of the stigma surrounding the property.

When President Andrés Manuel López Obrador announced the lottery for the home in June, he made no mention of who the last owner was or that it had ties to the drug cartel.

Obrador only mentioned it had a black fence and was seven minutes from a park.

London’s rental market is in crisis. Here’s why and how renters are struggling
This tiny castle is free for anyone who can move it
3 key things to know before opening a home equity line of credit
Mortgage demand took a big step back last week, even after interest rates fell further
China’s real estate crisis isn’t over yet, IMF says