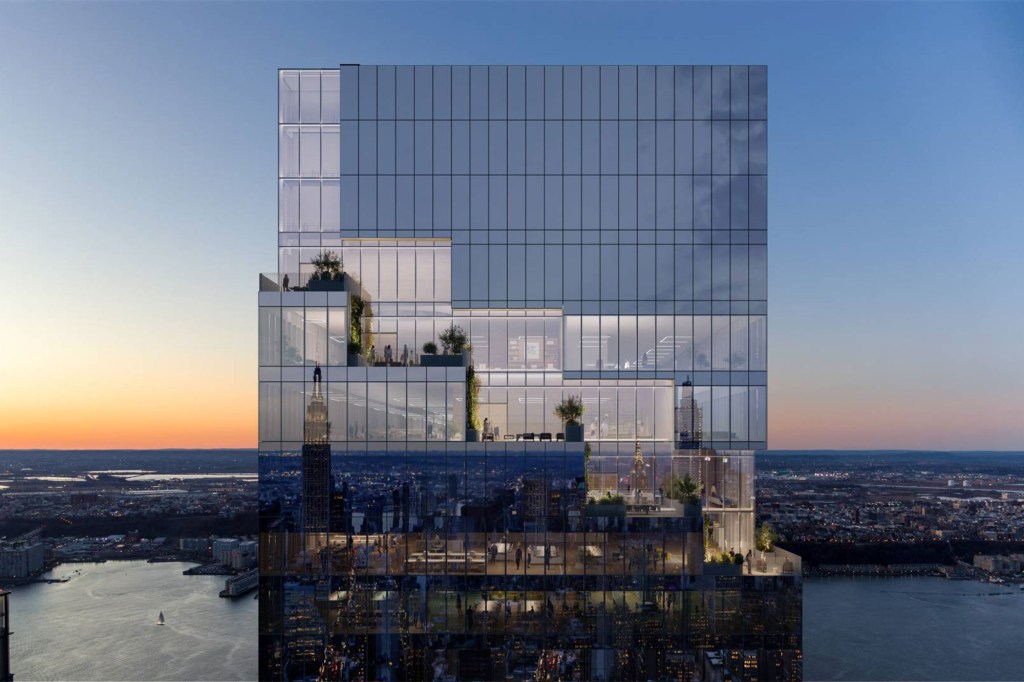 The Spiral is adding a large new tenant who won’t have to ask where the elevators and the bathrooms are when it moves in.

That’s because Turner Construction Company, which just signed a 13-year, 75,000-square-foot lease, is actually building the new Tishman Speyer tower on the far West Side. Turner is the general contractor on the BIG-Bjarke Ingels Group-designed skyscraper with a top-to-bottom landscaped spiral of exterior terraces.

Turner is moving its worldwide headquarters to the third floor of the tower, aka  66 Hudson Boulevard between West 34th and 35th streets. It will relocate from 375 Hudson St. in January 2023.

The deal brings The Spiral’s 2.8 million square feet to 54 percent leased with a year left before it’s completed.

Turner handles $12 billion of construction each year worldwide. Tishman Speyer President and CEO Rob Speyer called the firm  “an incredible partner as we built The Spiral, introducing technology, safety and workforce innovations that make it a new standard for modern office development.”

Turner CEO Peter Davoren said the building “will provide us with an environment that so well defines our vision and the future of the company.”

The Spiral will also be home to COVID-beating vaccine maker Pfizer, the anchor tenant with 746,000 square feet.

When news broke last week that Chubb signed on as the first tenant at 550 Madison Ave. — a deal that we first forecast three months earlier — observers, Realty Check included, were curious what the lease terms were.

The first tenant at a new development or redevelopment typically gets a more favorable deal than those that follow.

We’ve now learned that Chubb will enjoy 24 months of free rent as part of a long-term lease, according to sources.

For a street where nobody wants to shop anymore — as lots of off-base media reports claim —  it’s remarkable how the prime stretch of Madison Avenue north of 59th Street continues to draw luxury retailers even as some others move away.

The newest arrival will be Italian menswear maker Kiton at currently vacant 692 Madison Ave. between East 62nd and 63rd streets. Kiton just signed a lease for a three-level, 3,400-square-foot boutique next door to scarf and bag emporium Hermès — which will soon move into a much larger space at 702 Madison.

“This deal is a true testament to luxury retail in the city,” said broker Marc Sitt of Kassin Sabbagh Realty, who with Dorel Melloul represented the landlord at 692 Madison, the Ezair family.

“With Hermès opening their new flagship, this corridor will be more vibrant than it was in previous years.  We’re happy we structured a lease which made sense for everyone,” Sitt added.

Hermès will soon house its men’s and women’s collections in one building at 702 Madison.

Kiton is expected to move in next summer. The store will also remain at 4 E. 54th St., a building owned by Kiton.

The Madison Avenue asking rent was $1.2 million per year.

Other recent nearby retail transactions include Celine at 650 Madison Ave. and Balenciaga at 620 Madison.

Prolific architectural firm Kohn Pedersen Fox has renewed its lease and expanded at Tishman Speyer’s 11 W. 42nd St. KPF added 38,000 square feet on the entire seventh floor,  bringing its total in the 1928-vintage building — known for its fine views and abundance of natural light — to more than 100,000 square feet.

The rent started in the low $60s per square foot, sources said. As part of the deal, KPF will enjoy one year of free rent on the expansion floor.