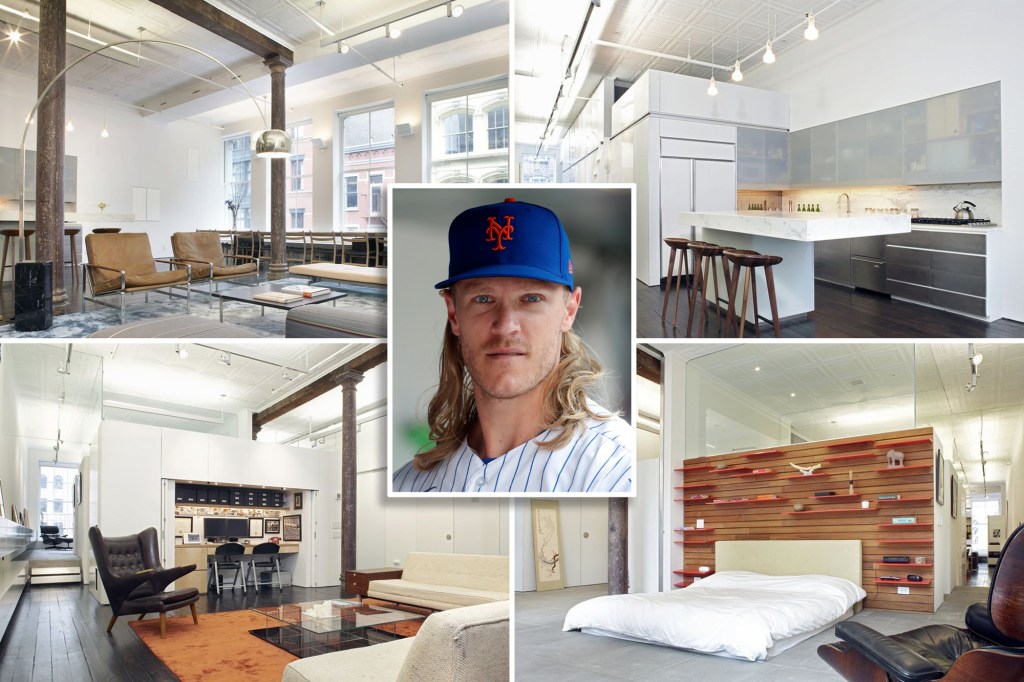 After nearly a decade-long career with the Mets, Noah Syndergaard is packing up his bags and heading to the West Coast.

But until he officially makes the big move to Los Angeles, he’s soaking up all the Big Apple has to offer in his New York City hideout. In just a matter of weeks, the all-star player is set to train and play for the Los Angles Angels in a $21 million one-year contract deal.

A full-floor loft located in the heart of Soho, the home combines original industrial elements with contemporary design, according to a previous listing.

Made up of two bedrooms and 2.5 bathrooms, Syndergaard has rented the home for almost two years for $16,500 per month.

The all-star pitcher can enter the home with direct keyed elevator access, which opens into the open concept living and dining area. A custom-built bookcase separates the living, dining and kitchen areas from the media room, which contains a home entertainment system and home office, according to the listing.

To the rear of the loft are the two bedrooms. The primary bathroom features dual showers, double sinks and a soaking tub, pegged as “spa-like.”

Syndergaard’s Mets exit comes after being a free agent in the past year and admitting he hadn’t heard much from the team.

“I didn’t really hear from them all that much in the last two months from the end of the season until now,” Syndergaard, 29, told ESPN.  “I understand they had a lot on their plates… leaving was the hardest decision of my life. But I definitely think that I made the right decision.”

“This is an important year for me. This is kind of a make-or-break time for me. I didn’t want to gamble on that kind of uncertainty that’s been going on with them,” the Texas native added.

In his final message to the Mets, Syndergaard dressed up as “Thor [his nickname]” and said goodbye in an emotional video on Nov. 17.

“New York has been my home for the last six years and both through the good times and bad, my love for you all in this place never wavered,” Syndergaard said in a voiceover for the video.

“Playing in New York has been the best experience of my life,” he added. “As a kid from a small town in Texas, this place changed me forever. I’ll never forget it and I thank you all for it.”

In May 2020, Syndergaard was briefly sued by his landlord of a separate Tribeca apartment for failing to pay rent on the $27,000-a-month penthouse he signed up for, a new lawsuit claims.

Syndergaard and his lawyers responded on April 30, notifying the owner that he “has no intention of taking possession of that subject premises and the landlord is hereby free to re-rent it as he sees fit,” according to the suit.

The case was dismissed a few months later without retribution.

‘Full House’ creator’s Manson murder mansion gets $25M price cut
Rent prices have dropped the most in these 5 U.S. metro areas. Why it’s cheaper to rent in many markets
Patrick Mahomes is quietly building a multimillion-dollar real estate empire
What is a ‘rolling recession’ and how does it affect consumers? Economic experts explain
Julia Fox claims mice-filled home will stop son from turning into a ‘f–king prick’