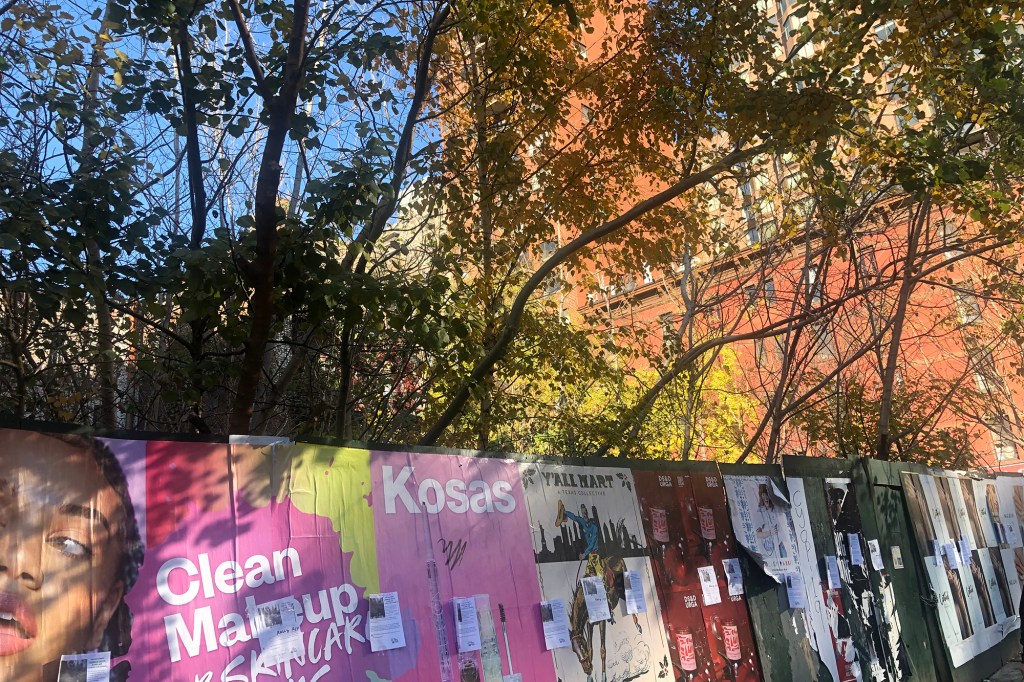 It’s a fancy neighborhood and its politicians against the weeds — and the weeds, and the rats, are winning.

Most New Yorkers want green space in their neighborhoods. But the jungle of 20-foot-tall, wild vegetation at the southwest corner of First Avenue and East 78th Street in Manhattan is nobody’s idea of a pastoral paradise.

The site at 1491-1493 First Ave. isn’t a park but a vacant lot surrounded by a plywood fence. The untamed growth has been the area’s great green enigma — and a rats refuge — since the owners demolished several tenements and stores 15 years ago.

Towering, tree-like weeds snake across the sidewalk almost into the bike lane. Ravenous rats sneak under and over the fence to feast on dead mice, scraps of human and pet food and even the occasional luckless bird.

The filth and health risk horrify workers and customers of the area’s many restaurants and grocery shops.

“They pop out and make the girls jump,” he said of bar-hopping young women who stroll between First and Second avenues.

The densely populated Upper East Side, widely regarded as immune to the problems of lower-income neighborhoods, actually has one of the city’s worst rat infestations, Patch.com reported. Complaints jumped by 55 percent so far this year, more than double prepandemic rates, according to 311 data.

On Saturday, US Rep. Carolyn Maloney, Councilmember-elect Julie Menin, and scores of nose-holding neighbors and activists mounted a sidewalk rally outside the lot to demand action.

Participants grudgingly marveled at the wild kingdom’s resiliency. One neighborhood resident who didn’t want to be named said, “The winter storms knock it down and then everything pops back up again.”

Menin, who takes office on Jan. 1, called the situation “unconscionable.” She said she’ll introduce legislation that “after so many years with so many violations, we could have the Parks Department come in and build a community garden.”

Rally organizer Ben Bathman, of grass-roots organization UES Green Space Now, said the First Avenue lot “should be accessible to anybody who walks by.”

Rep. Carolyn Maloney echoed, “Let’s make these sore spots into something beautiful.” But, “It’s private property. There’s not a way to force the owner to do something but we can try to see if they’ll cooperate with us on their own.”

The elusive landlord is listed in Department of Finance records as C3D E78 LLC, with the same Midtown address of 408 Eighth Avenue as for previously listed owner Katherine Chou. Part of the deed document locates the office in “Flushing, NY,” although no such address exists.

Adding to the mystery, the Department of Buildings lists open violations for façade and window issues — although no building has stood at the location for fifteen years.

Maloney said, “The first item to deal with is rat control.” But she said ruefully of the site, “We don’t even know who owns it.”

New York must save the Central Park Boathouse — here’s how to get the job done
Living In A $160K, All Cash Home In Mexico | Unlocked
Something MASSIVE is Happening in The Housing Market With @Scott Walters – Real Estate USA
Top 10 Cities Where Home Prices will Crash (Record SURGE in Homes For Sale)
The 2022 Housing Market Crash is Here | Do this NOW.