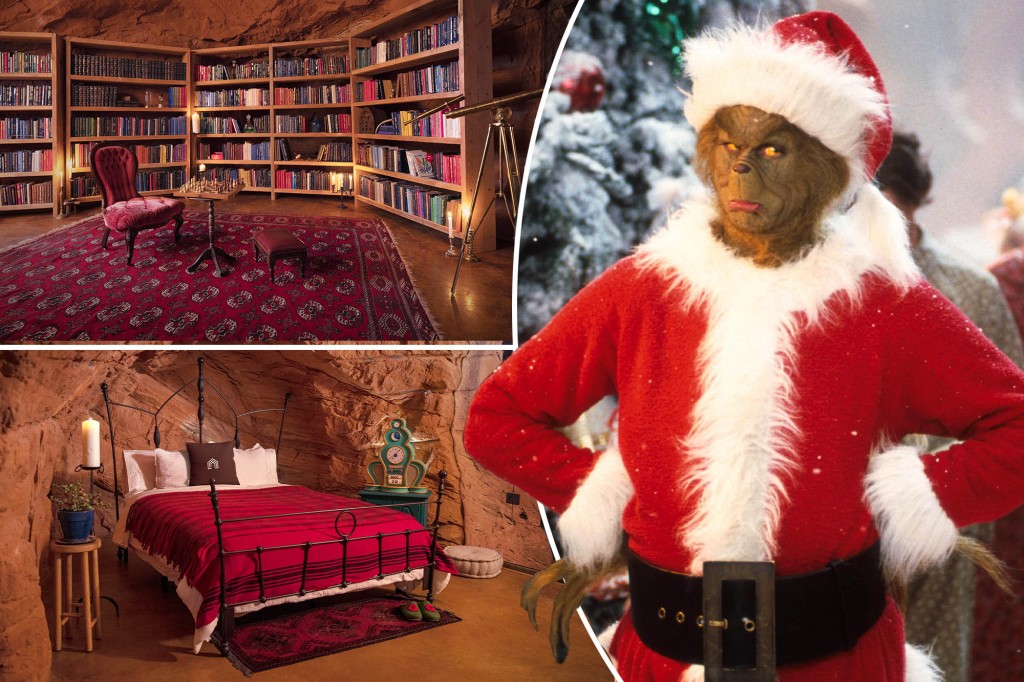 Calling all the Whos!

Here is your chance to stay in the Grinch’s very own cave for Christmas.

Perched high up on a mountain in Boulder, Utah, is a 5,700-square-foot lair guests can explore.

Each room is a nod to the Grinch’s original home from the iconic Dr. Seuss book “How the Grinch Stole Christmas!” — and the TV and film incarnations it inspired.

The 1957 book about a grumpy hermit who lives on the outskirts of town — where he hatches a plan to steal Christmas from the Whos of Whoville — has spawned, most notably, a classic 1966 TV special and Ron Howard’s 2000 feature film starring Jim Carrey and Taylor Momsen.

The residence, hand-carved on the side of a massive stone mountain, will be available to rent between Dec. 13 and 27 at only $19.57 a night, a nod to the year the book was first released.

Guests can also spot some of the Grinch’s gadgets throughout the home, like his exaggerated coffee machine and contraptions for Max.

The cave comes with a main bedroom, a guest bedroom, a study and a few bathrooms.

And in true Grinch isolationist fashion, there is no internet or TV.

The cave also features a kitchen stocked with all the Grinch-themed essentials, including Whoville’s signature Roast Beast, Who Pudding and Who Hash.

Guests can book the Grinch’s cave on Vacasa.com starting Dec. 3. Vacasa partnered with Dr. Seuss Enterprises to bring this experience to life. Can’t get yourself over to North America? You can explore the Grinch’s house through a 3-D tour on the website.

“Everywhere they go, visitors will be completely immersed in the world of the Grinch,” the rental management company hypes in its press release.

Theodor Seuss Geisel — aka Dr. Seuss — is one of the most beloved children’s book authors of all time. From “The Cat in the Hat” to “Oh, the Places You’ll Go!,” his beloved characters, stories and two-ink art style have been a lasting influence on generations of children and adults.

The catalog of books Seuss wrote and illustrated under the pseudonym (and others he penned but did not illustrate, including some under the nom de plumes Theo LeSieg and Rosetta Stone) have been translated into 45 languages.

Hundreds of millions of copies have found their way into homes and hearts around the world, earning the author a long list of awards, including Caldecott honors, the Pulitzer Prize and eight honorary doctorates. Works based on his original stories have won three Oscars, three Emmys, three Grammys and a Peabody.

3 key things to know before opening a home equity line of credit
Mortgage demand took a big step back last week, even after interest rates fell further
Hong Kong services to rebound as China reopens, but UBP says sector is coming from ‘fragile situation’
Luxury developers in Los Angeles bet someone will pay record prices for these condos
Mortgage rates drop to the 5% range for the first time since September