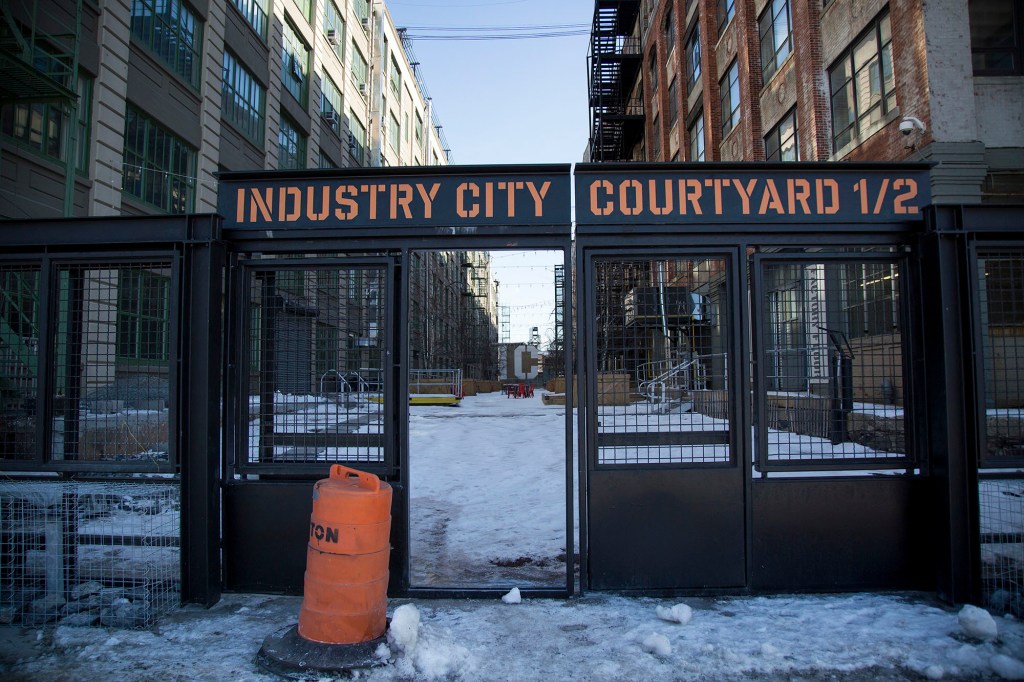 The owners of Industry City in Brooklyn’s Sunset Park suffered a setback last year when one progress-hating City Council member torpedoed a rezoning that would have allowed a few more buildings to rise at the 35-acre site.

But owners Belvedere Capital, Jamestown and Angelo Gordon Co. shrugged off the disrespect, at least for now (the rezoning never came to a  vote but was withdrawn by the developers when they saw it would fail).

“We’re looking forward, not backward,” said Industry City Chief Executive Andrew Kimball. He preferred to focus on the enormous strides the 16-building, 6-million-square-foot waterfront complex has made since it opened in 2013.

Deals with scores of new tenants brought the complex to more than 80 percent leased. Recent and new arrivals include 60,000 square feet for Porsche and Volvo with have showrooms as well as service centers, West Elm,  a longtime tenant that added a 10,000-square-foot retail store, and production company The Garage, which specializes in commercials for brands such as Coca-Cola, Hershey’s and Cadillac.

Kimball said, “It’s truly astonishing. Of 4 million square feet we’ve leased since 2013, the 800,000 in the past 18 months are the most we did in any 18-month period. And this was during the global pandemic.”

He attributed the success partly to $450 million the partners invested in new infrastructure for historic, century-old buildings at site, a former shipping and heavy-manufacturing center. Improvements included creation of five acres of open-air public space.

Another factor is that, “we’re finding that people want their office next to their industrial and manufacturing spaces,” Kimball said. For example, Danny Meyer’s Union Square Hospitality Group leases 20,000 square feet of offices within a 70,000-square-foot commissary facility, all in a single building.

Industry City’s success parallels that of Brooklyn’s other great industrial park, the Brooklyn Navy Yard. But unlike the Navy Yard, which is city owned and has enjoyed subsidies, Industry City is entirely privately owned and funded and is more public-friendly.

Kimball’s optimism extends to the new mayoral administration. “I feel very good about it,” he said. “I’ve worked with [former Brooklyn borough president] Eric Adams for many years, both at the Navy Yard and at Industry City,” he said. Kimball previously was CEO of the Navy Yard Development Corp.

“He cares deeply about economic development,” Kimball added. I’m hopeful that Eric really sees the value of this kind of jobs creation.”

It was a slightly shrunken but no less jolly Fried Frank real estate holiday party at Cipriani 42nd Street last week. Despite a smaller guest list, the annual industry blowout — on hiatus last year — was a full-scale affair with tons of food and free-flowing boozes.

The law firm’s real estate chairman, Jonathan Mechanic, effusively greeted arrivals as in the past.

“I appreciated everyone for joining us in forging a path forward, supporting our city and our industry by coming together and celebrating our renewal,” Mechanic said.

If you’re in the restaurant business, it pays to have friends in real estate. Simon Oren, an owner or partner in a score of Manhattan eateries, knew two years ago that the building that was the 16-year home to his popular Cafe d’Alsace at 1695 Second Ave. faced demolition.

He started looking for a new location as the pandemic delayed the tear-down, but the bistro’s fate remained in limbo. Then, in October 2020, Richard Fodera, the landlord of the former Writing Room space one block north — once the site of legendary Elaine’s — approached Oren to say his own tenants were vacating.

Might Oren want to move Cafe d’Alsace there? They shook hands and swiftly made a deal. The restaurant reopens with its gleaming zinc bar, terrazzo floors and multicolored vintage bottles at 1703 Second Ave. on Dec. 15.

The starting rent for the 10-year deal is in the low triple digits. Melio is relocating from a smaller WeWork space at 18 W. 18th St. The tower has 176,000 square feet of state-of-the-art offices on the 14 top floors.

Melio CEO Matan Barr said, “We look forward to establishing our New York headquarters at Zero Irving,” aka  124 E. 14th St. The firm’s online platform allows small businesses to seamlessly transfer and receive payments. With offices here and in Tel Aviv and Denver, it recently announced an additional funding infusion that tripled its valuation to $4 billion.

Zero Irving was developed by RAL Development Services and Junius Real Estate Partners. The tower grew out of negotiations for a 99-year ground lease from the city, which owns the land.

The ground floor is leased to a high-end food hall under the  Urbanspace banner. Floors two through 14 are earmarked for an 80,000-square-foot digital skills training center.

Office leasing is handled by a JLL real estate team headed by Mitchell Konsker with Benjamin Bass, Dan Turkewtiz, Kristen Morgan and Carlee Palmer. Konsker said, “Melio  was drawn to the property due to the amazing rooftop garden and outdoor area with spectacular views, 23 feet of double-height space,  a private  terrace, a  tenants-only gym and the quality of the new construction.”

The Silicon Valley-based venture capital firm founded by Marc Andreessen and Ben Horowitz, which is known as a16z, has signed a 10-year lease for 33,560 square feet of offices at 200 Lafayette St. The new digs will serve as the firm’s New York headquarters, replacing a much smaller footprint at 11 Madison Ave.

The company boasts $19.2 billion in assets under management, including a $3.1 billion crypto fund that will be run out of 200 Lafayette St.