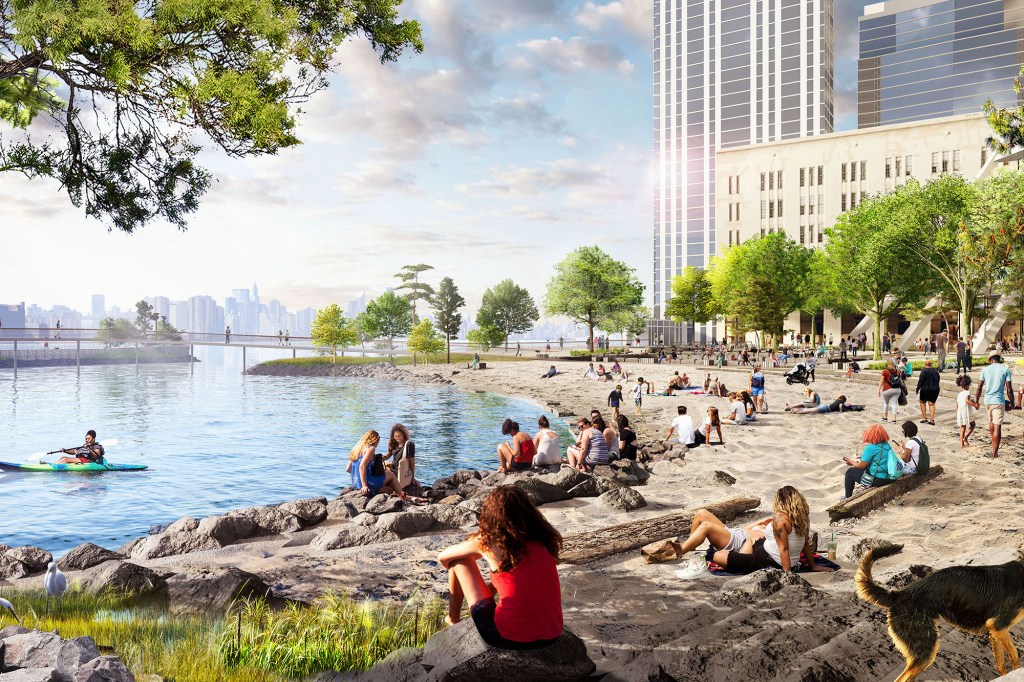 It was a big week for future projects as developers won City Council approval over NIMBY objections.

In a blowout reminiscent of the Chicago Bears’ 73-0 slaughter of the Washington Redskins in the 1940 NFL title game, Council members voted 48-0 to pass rezoning for a $1 billion Williamsburg, Brooklyn, waterfront complex with thousands of new apartments. Developer Two Trees Management expects to start building by 2024.

“The tide is turning against NIMBY-ism,” Two Trees managing director for external affairs David Lombino said of the phenomenon. He predicted, “You’ll see more of it under [incoming mayor] Eric Adams.”

The centerpiece of the 3.5-acre Williamsburg site called River Ring, is a pair of sloping apartment towers rising to 710 and 560 feet designed by BIG, the architectural firm headed by Bjarke Ingels. Some 263 of a total 1,050 units will be “permanently affordable” and have the same design and amenities as market-rate units.

The plan also calls for Two Trees to pay for and operate water-based recreation and programs on three adjoining acres, including  kayaking, marine ecology studies and an accessible beach on the East River. There will also be a new, 50,000-square-foot YMCA facility and a $100 million investment in resiliency infrastructure.

But how did the project receive unanimous backing from the often development-averse Council? We reported in January 2020 that politically connected residents of Northside Piers towers, just north of River Ring, fiercely opposed the plan over “density” and its supposed negative effect on the waterfront. They warned of “horrible” conditions such as “broken bottles and  people drinking.”

But the resistance seemed more to do with blocking views of wealthy New Yorkers from their Northside Piers apartments.

Lombino credited support from former Brooklyn Borough President Adams and Council member Steven Levin, “who was extraordinarily helpful in the face of some local opposition.”

Lombino added, “We’re seeing widespread awareness that there’s a desperate need for new housing, and it sometimes needs to go into wealthy neighborhoods.”

The MTA as we know it could face the end of the line if Gov. Kathy Hochul were to impose another statewide lockdown to slow the fast-spreading  virus.

We wrote in these pages on Friday that a months-long lockdown like the one that turned the Big Apple into a “ghost town” in 2020 could finish off industries for good that gamely crawled back to life earlier this year —  including real estate, media, retail, hotels, Broadway and restaurants.

But  public agencies would also be at risk, none more than the indispensable MTA.

The agency — a linchpin of the entire northeast economy — wouldn’t comment on what effect a shutdown might have. But a glance at known facts reveals a frightening picture.

The subways and rail and bus lines run by the MTA lost over $200 million a week during the worst of the pandemic — accelerating an already grave fiscal threat to the agency, which faced a $2 billion structural deficit.

To avert short-term disaster, the federal government stabilized the MTA with $14 billion in emergency funds through 2025.

But a second shutdown similar in length to last year’s would bring the fiscal cliff up much sooner. Who’d use subways, buses or trains if  everything is closed again?

To avoid default or catastrophic service cuts, the MTA would need to race through much of the federal funds in the next year or two. It would then need more aid from Washington — if lawmakers could even be persuaded to cough up more dough.

Let’s pray  it doesn’t come to that.

The pyramid-crowned, 49-story tower is owned by a joint venture of SL Green, RXR Realty and NYRT.

The asking rent was $70 per square foot. The 2-million-square-foot tower is 95 percent leased.

Hang on, America’s Railway workers want WHAT? Are they crazy? | Redacted with Clayton Morris
Why I Hate Flipping Houses (the truth)
WORST HOUSE FLIP EVER ! A REAL ESTATE FLIPPER’s WORST NIGHTMARE ! REAL ESTATE FRANCHISE
So THIS is how they plan to screw these companies, from inside out | Redacted with Clayton Morris
Geld verdienen mit Land Flipping in den USA – Jack Bosch & Oliver Fischer