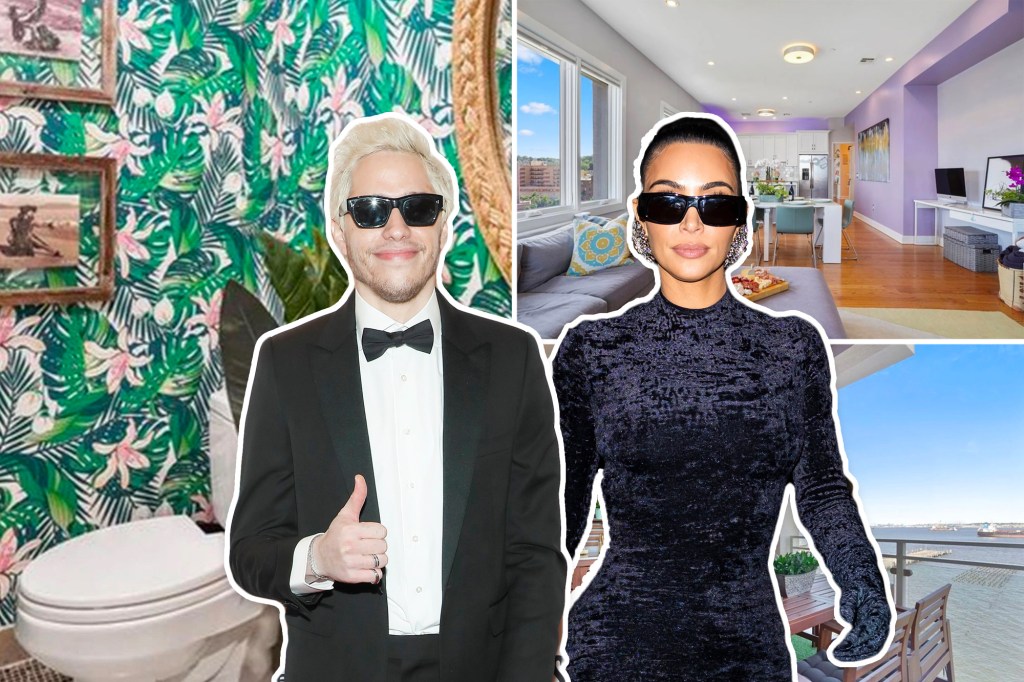 Pete Davidson, 28, moved out of his mother’s basement and into his own luxury condo, where he’s been cozying up with his latest paramour, Kim Kardashian, 41.

In an exclusive video obtained by Page Six, the divorcée was recently spotted leaving his Staten Island condo through the side door following a weekend of low-key dates.

Kardashian, fresh off her bombshell split from Kanye West, attempted to leave Davidson’s place incognito in a black hat and all-black ensemble as she made her way into an SUV.

Sources told Page Six that Kardashian was at Davidson’s condo throughout their romantic weekend despite her having a room at the Four Seasons Hotel in the Financial District. Following their weekend at his condo, Davidson was also spotted leaving the KKW Beauty founder’s hotel.

The two have been linked together following Kardashian’s appearance on “SNL” in October 2021, when they shared a smooch in character, but were soon after seen holding hands at Knott’s Berry Farm in California.

Page Six revealed that Davidson also treated the reality TV mogul to a private dinner on the roof of Campania on Staten Island, where they were able to enjoy a romantic meal sans security. She then brought Davidson as her plus-one to Simon Huck’s birthday party at Zero Bond.

The unlikely playboy purchased his waterfront condo for $1.2 million in December 2020, The Post can report.

Here’s a look inside, where the sparks have been flying between the odd couple.

With two bedrooms and two-and-a-half bathrooms, the residence is situated on the water and boasts panoramic views overlooking Manhattan.

Davidson got his own place four years after he snagged a $1.3 million Staten Island abode in 2016 for his mom, Amy Waters. Davidson had been living in the basement of the home until December, when he moved into a high-rise.

But the “King of Staten Island” is still remaining close to home — and is proud of it. He’s been showing Kardashian his favorite local haunts, including Angelina’s Ristorante, where they posed for a photo with the owner.

Davidson purchased the condo on Staten Island through an LLC, property records show.

A rep for Davidson has not yet responded to The Post’s request for comment.

In the original listing, photos show a Hawaiian-themed bathroom and a purple-painted kitchen.

One of the two bedrooms is pictured with bunkbeds — no word yet on whether the bunks remain in Davidson’s current design.

During a Zoom call posted to TikTok in April, Davidson revealed that he moved out of his mom’s place.

According to the listing, the condo is described as a “pinnacle of luxury lifestyle living.”

The home features soaring ceilings, tall windows with an abundance of natural light and a private terrace.

Other features of the home include an open layout plan, a redesigned kitchen with a peninsula seating area, quartz countertops and a unique “waterfall” installation.

The master suite boasts a bath with a marble vanity, Jacuzzi tub, separate shower and a walk-in closet with a private door to the terrace.

China’s real estate crisis isn’t over yet, IMF says
Mortgage demand took a big step back last week, even after interest rates fell further
Seth Rogen to host slumber party at his LA creative retreat
The Federal Reserve is likely to hike interest rates again. What that means for you
Luxury developers in Los Angeles bet someone will pay record prices for these condos