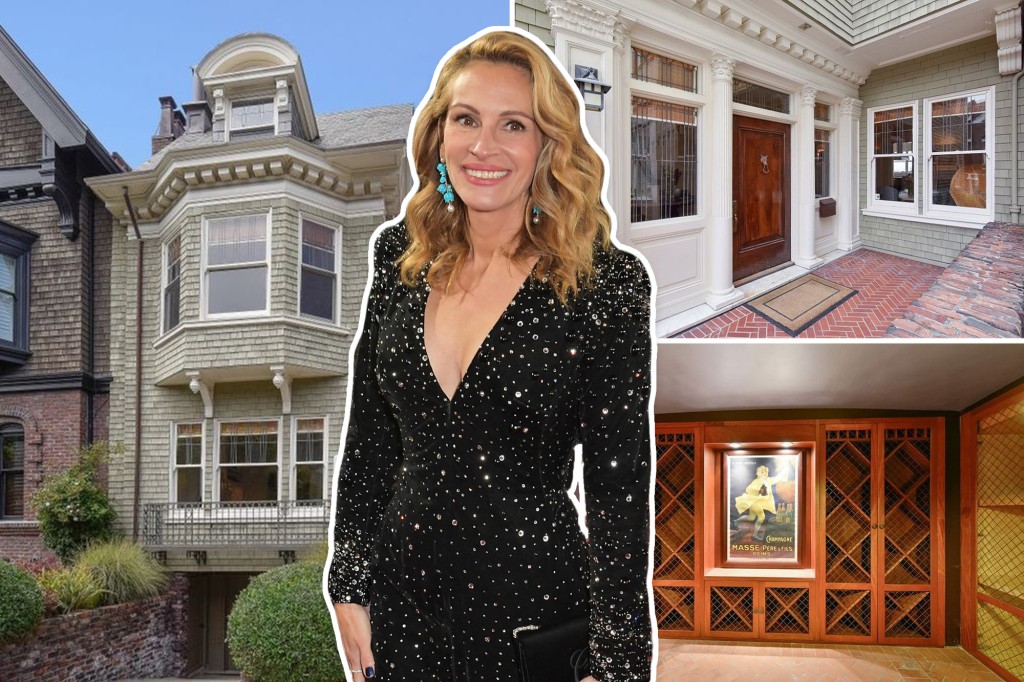 Julia Roberts shelled out $8.3 million for a five-story century-old Victorian Revival-style home in the heart of San Francisco.

The Post has obtained photos of the five-bedroom, 4.5-bathroom property, located in the quiet and low-key Presidio Heights neighborhood.

The A-list actress — who was most recently spotted basking in the Australian sun in a hot pink swimsuit — is known for her acclaimed roles including “Erin Brockovich,” for which she won an Academy Award, “Steel Magnolias,” “Pretty Woman” and “August: Osage County,” among many others.

Built in 1907-’08 by architect Sylvain Schnaittacher and remodeled by John Wheatman, the “Homecoming” star’s residence boasts views of the San Francisco Bay and Golden Gate Bridge from the kitchen, family room and the primary bedroom suite.

The home includes a bonus room on the top floor, in addition to the five floors, and a two-car tandem garage, wine room, outdoor dining space and garden.

Property records show the home is under the “Grayfox Trust,” the same trust associated with her country-spanning collection of real estate, including a scenic ranch in Malibu’s Point Dume and a West Village co-op in New York City.

In the kitchen is a back hallway which leads to a second set of stairs to the other four floors.

On the third floor is primary en-suite bedroom which has a walk-out slate balcony and skylight. There is also a separate dressing table area, walk-in closet with wood-paneled doors, a large remodeled bath with split vanities and a separate shower and tub.

In 2016, she sold her sprawling Hawaiian oceanfront estate for $16.2 million.

Beyoncé, a $100k-a-night suite and a red carpet of influencers: Dubai basks in its booming economy
Mortgage demand took a big step back last week, even after interest rates fell further
Weekly mortgage demand jumps 7% as interest rates drop to lowest level since September
The Federal Reserve is likely to hike interest rates again. What that means for you
How Kyle Richards’ husband Mauricio Umansky built a $57B real-estate empire