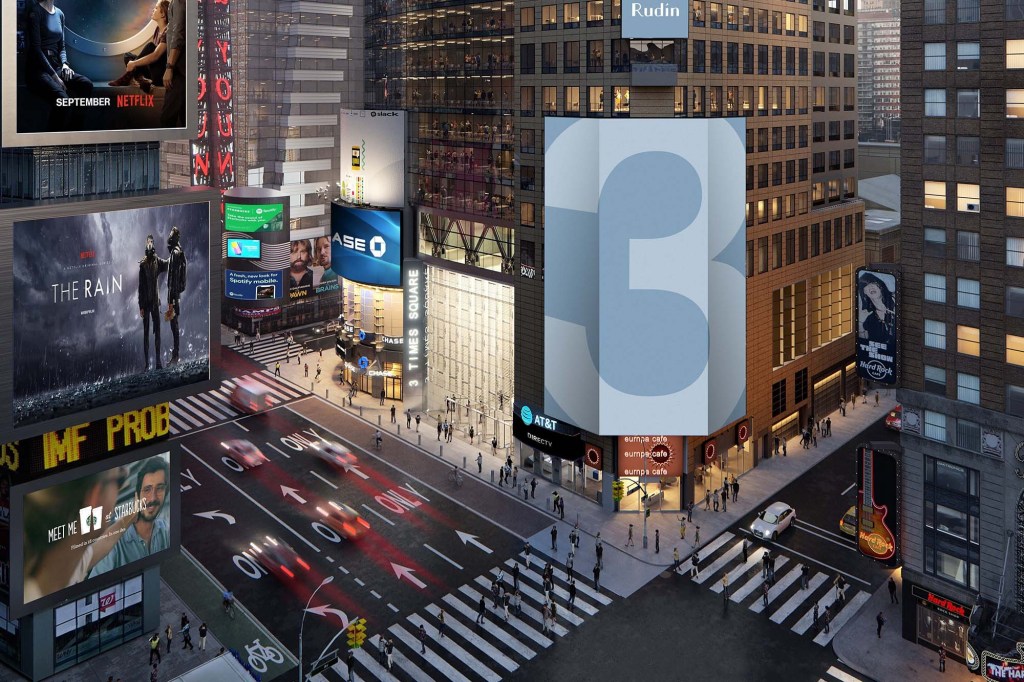 Touro College and University System has signed a long-term lease for 243,305 square feet at the Rudin Family’s Three Times Square. Touro will move seven of its schools into floors three through nine and parts of the ground and second floors.

The half-century old educational institution will have its own dedicated entrance and lobby at the southwest corner of Seventh Avenue and West 43d Street, as well as lounges, cafés and other amenities for some 2,000 students. Touro’s floors will house classrooms, laboratories, libraries and event spaces.

All the floors will be connected by attractive new internal staircases.

“Fire stairs won’t do it,” said Touro Senior VP of Operations Jeffrey Rosengarten of the need to create a community feel.

He said that Touro’s graduate schools of business, education, Jewish studies, social work and technology, as well as its College of Pharmacy and New York School of Career & Applied Studies, will move from locations on West 31st, 40th and 125th streets.

Touro leases or owns about one million square feet in Manhattan and the outer boroughs. Its total enrollment of 19,000 is spread over 35 locations in the US, Berlin, Jerusalem and Moscow.

But Rosengarten spent much of the past seven years searching for a location to create a main Manhattan campus. “It was difficult because we had very specific needs,” he said, including a large block of contiguous space on lower floors, tall ceiling heights and 30,000-square-foot floor plates “so we could have a sufficient number of classrooms and laboratories on a single floor.”

Plus, we needed “a building that frankly wanted to accommodate a school where we could create a building-within-a-building. Three Times Square hit the mark for all of them. Plus it became clear from our students and faculty that they wanted to be on the West Side connected to subways and public transportation,” Rosengarten said.

Rudin Management Company CEO William Rudin said that a university inside an ultra-modern Times Square tower that opened in 2001 might seem “definitely out of the box, but in this world we live in, we’re all calling audibles.”

Touro’s decision reflects “the continuing stretching of the market in terms of where tenants are willing to move,” Rudin said, and recalled that nobody once imagined that banks and law firms would ever come to the once-seedy “crossroads of the world.”

He noted that Touro students “have been riding subways for their whole lives, and it’s a very easy way to get to school.”

Rosengarten said he first began thinking about Three Times Square in late 2019. He knew the 30-story, 850,000-square-foot tower had looming vacancies as Thomson Reuters, which is Rudin’s partner in the building’s ownership, began unloading some divisions and a few other tenants were moving out.

Even so, “I wasn’t sure at first they would want to bring a university in,” Rosengarten said.

Rudin recalled, “They started looking [seriously] at Times Square in late 2020, at the height of the pandemic. They continued their conversations with us through 2021 and we consummated the deal at the end of the year.”

Some 500,000 square feet remain available at Three Times Square. As we reported last spring, Rudin tapped architects FXCollaborative for a $25 million property upgrade. The highlight most visible to the public is a new triple-height lobby and a sculptural façade panel on lower floors that will diffuse the bright lights outside for lobby-goers.

Neither Rudin nor Rosengarten would discuss lease terms. Rudin said last April that asking rents were in the low-$70s per square foot on lower floors and in the mid-$80s higher up.

Asked whether the deal was market-rate, Rosengarten said, “I don’t want to call it a buyers’ market but it certainly helped us put together a financial deal that we felt was affordable and the Rudins thought was fair.”

What kind of chemistry will Touro bring to Times Square? “A panache different from law firms,” Rosengarten said. As for the Elmos and other cartoon characters on the street, “We can negotiate for our students to take pictures with them,” he laughed.

Julia Fox claims mice-filled home will stop son from turning into a ‘f–king prick’
Mortgage demand took a big step back last week, even after interest rates fell further
Patrick Mahomes is quietly building a multimillion-dollar real estate empire
Luxury developers in Los Angeles bet someone will pay record prices for these condos
Mortgage rates drop to the 5% range for the first time since September