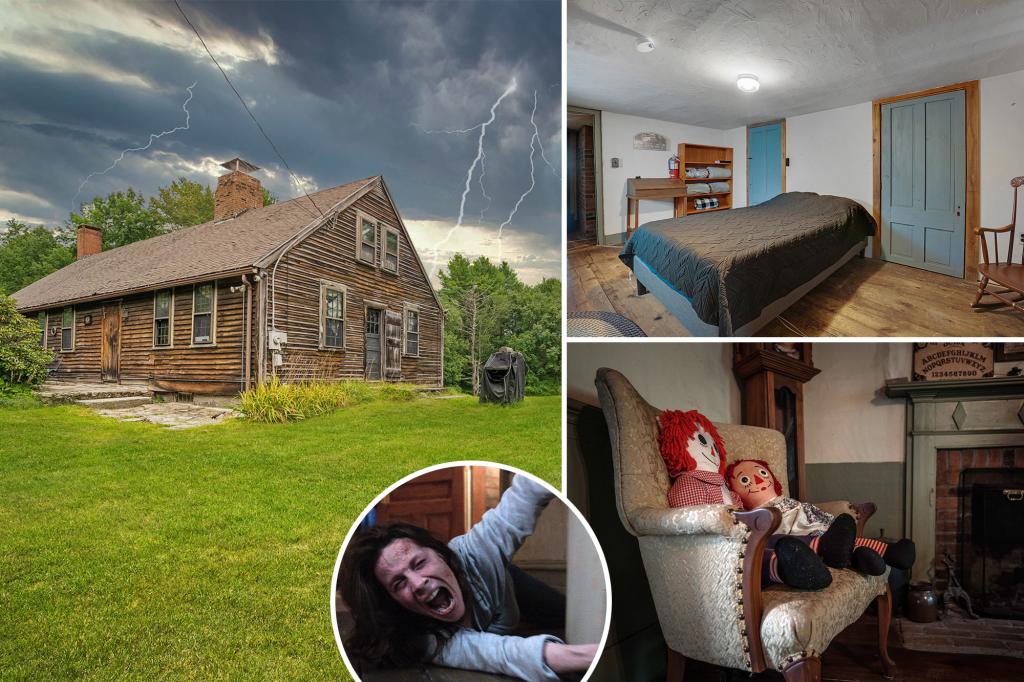 This Rhode Island home is simply spook-tacular — and perhaps that’s why it just sold for more than its asking price.

This early 19th-century, three-bedroom spread in the town of Burrillville — despite its charming historical touches — is actually the real-life haunted house that inspired the 2013 horror film “The Conjuring.” After hitting the market in late 2021 for $1.2 million, the apparition-heavy abode just sold for $1.52 million, or 27% above the asking price, its listing brokerage told The Post.

The property, located at 1677 Round Top Road, measures 3,109 square feet — with features including handsome beamed ceilings over wide-plank hardwood floors, fireplaces and wooden cabinetry in the kitchen. But it also comes with roommates in the form of ghouls, though it’s not clear whether they contribute to paying the bills.

The sellers, paranormal investigators Jenn and Cory Heinzen, purchased the home for $439,000 in 2019 — and spent four months keeping themselves to one room as “a sign of respect for the spirits, letting them get used to us instead of barging in,” they told the Wall Street Journal at the time of listing. However, that didn’t stop a black-colored figure once seen looking in at them from the doorway of their room.

“Once we realized we were both awake and both seeing it, it was gone,” Cory Heinzen told the Journal. The pair also have heard footsteps and knocks — and have even seen flashes of light in rooms that don’t have lights in them.

The Journal also first broke the news of this sale, adding that the new owner is a Boston real-estate developer named Jacqueline Nuñez, 58. She was one of more than 10 offers on the property — and one of the prospective owners interviewed by the sellers to make sure they met the requirements, including not living in the home for the buyer’s own good.

“This is a very personal purchase for me,” Nuñez, who was represented by Ricardo Rodriguez and Bethany Eddy of Coldwell Banker Realty in Providence, told the Journal. “When it hit the market, I thought, ‘This is a property that enables people to speak to the dead.’” Nuñez added she doesn’t feel the house is home to a demon — but simply a structure that is “uniquely an amplifier for our energy, attitudes and beliefs. If your end goal is to be terrified, it can deliver. Or if you go there to connect with a loved one, it can deliver that, too,” she told the paper.

Nuñez plans to host events at the house with the Perron family, members of whom previously owned the home and operate it as a sort of learning center. Andrea Perron, 63, lived there between 1971 and 1980 and told the Journal she and her family experienced spiritual activity there.

For instance, during a séance in 1974, she saw her now-82-year-old mother, Carolyn, levitating in a chair before being thrown 20 feet from it and hitting her head on the floor. Other bizarre alleged occurrences include children seeing ghosts they believed were actual people until they vanished, witnessing a broom moving by itself across the floor, smelling an odor of rotting flesh and one child being slapped by an invisible force.

“The Conjuring,” which became a franchise of horror films, is a fictionalized account of the Perron family and their work with paranormal investigators Ed and Lorraine Warren. The original film didn’t shoot in the just-sold abode — and the Perrons, at the time of their purchase, hadn’t been informed of the home’s dark history of murder, rape and suicide. Even the property’s listing says it’s rumored to be haunted by the spirit of Bathsheba Sherman, who resided there in the 19th century.

Beyond its unusual history, the home stands on an 8.5-acre lot — and has one full bathroom and one half-bathroom, according to the listing, represented by Benjamin Kean and Ben Gugliemi, of the Blackstone Team at Mott & Chace Sotheby’s International Realty.

“I’m not afraid of the house,” Nuñez told the Journal, but also quipped: “Ask me again in a year.”

Where companies say they will cut budgets first in a softer economy
North Korea issues a major warning and we should all pay attention | Redacted with Clayton Morris
Before and After House Flip – Project G | 1 MILLION PROFIT! | Tenant Nightmares
Completed Flip Property Walkthrough | Philadelphia PA
Real Estate Collapse? You Could Be Wrong