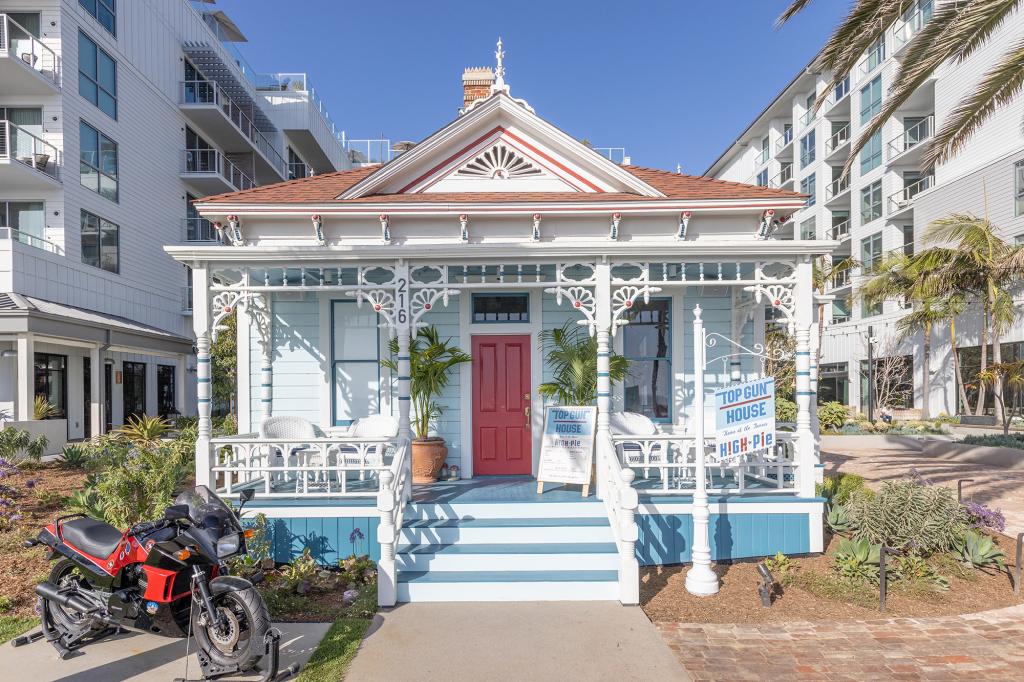 Feel the need … the need for pie?

A former movie set can help if so. The iconic fictional residence of Kelly McGillis in 1986’s “Top Gun” has been reborn as a pie shop — and opened just weeks ahead of the Friday release of “Top Gun: Maverick.” As a nod to the aerial action flick, the eatery, located in Oceanside, Calif. — a military town that’s about a 40-minute drive north of San Diego — is named HIGH-Pie.

“The house is so near and dear to so many hearts of the local community,” HIGH-Pie owner and chef Tara Lazar told The Post of the 135-year-old Victorian cottage, which houses her most recent restaurant venture.

Built in 1887, the 500-square-foot property fell into disrepair following the film, and was subsequently rehabilitated by a historical society and relocated from its original address to the Mission Pacific Hotel’s beachfront courtyard. It’s now within sight from Oceanside’s scenic Pier, which offers wide views of the Pacific’s blue waves and the palm tree-dotted coastline.

The process of converting it into a bakery, Lazar says, was no small feat.

“Besides it being painstakingly difficult to convert a historical house into a commercial kitchen, we wanted to be sensitive to the loyal fans of” the Tom Cruise classic, she said. Thanks to a “dream team” she feels the finished result succeeds “in representing all things Americana and honoring the history of the house as well as patronage to ‘Top Gun.’”

“The renovated interior is adorned with bold, retro signage, Victorian era panels and an upholstered fireplace, as well as fun design touches such as ‘Top Gun’ set photos, historical imagery of both Oceanside,” and vintage furniture, details a press release. The home has maintained its original blue exterior and now boasts a serving counter with “deli-style display cases and shelves,” plus an assortment of individual hand pies filled with seasonal compote and displayed on a “Willy-Wonka-esque conveyor belt.” Outside, a vintage scooter sits, both for aesthetics and for deliveries to neighboring hotels.

As for the menu, pies (which are gluten-free — an incidental and not a conscious decision, Lazard told the publication Restaurant Hospitality) cost $3 each and flavors currently include a locally sourced strawberry-rhubarb, among other sweet options.

For an extra $2, a scoop of mascarpone ice cream can be added to the pie, which is then deep fried, according to the industry news site. Coffee costs $1 and there’s also apple kombucha, a special cherry pop and a $6 iced coffee drink made from condensed milk and Revolution Roasters’ beans.

We’re FLIPPING A HOUSE for the first time! | How we bought this house for only $21,000 cash
How To Buy Your First Rental Property (Step by Step)
It’s TOO late for them to stop it and they know it, recession is here | Redacted with Clayton Morris
The Fed, Inflation, and War | My Real Estate Investing Strategy Today
Small Home With the WORST Layout Gets Entire Remodel | Flip or Flop | HGTV