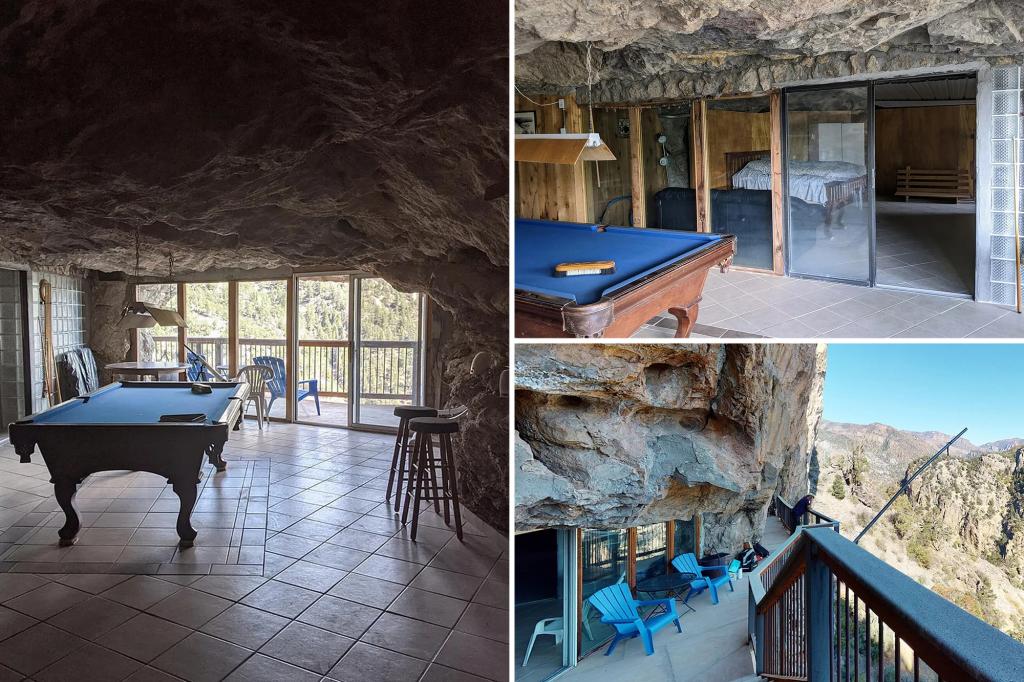 Anyone can have a man cave in their house. But only the future buyer of a crazy new Colorado listing can say they live in what Zillow Gone Wild calls “the most literal cave house we’ve ever seen.”

“The way it’s built, it’s nothing short of the eighth wonder of the world,” said Mike Henry, founder and director of Integrated Mountain Group, which lucked out in landing the one-of-a-kind listing. Ironically, the home’s owner, who has lived in the cave with his wife for the past 40 years, once spent time not too far from an actual wonder of the world: the Great Pyramid of Giza.

“Our client has a really cool back story,” Henry added. “He went to Egypt and fasted for 40 days in a cave.”

Still, the owner’s inspiration for his family’s unusual subterranean abode didn’t come from being hangry. It came from a book. According to Will Vannice, the Integrated Mountain Group agent representing the property, the owner and his wife traded the East Coast for Colorado in the ’70s after reading a book about caves in the Rocky Mountains. They were obsessed with spelunking, and while on a tour of state caves they saw this cliffside lot for sale. Where most people would see the scene of Mufasa’s fatal fall in “The Lion King,” this couple saw home sweet home.

“The next thing you know, the owner had a license in explosive materials,” said Vannice with a laugh, before elaborating how the owner learned the art of blasting at a local mine. “He got aggressive and really got after it.”

Vannice wouldn’t say how much money the owner has invested in the home. However, he’s quick to emphasize the many years of blood, sweat and tears that went into the place.

The entire cave was carved by hand — a considerable feat given the fact the owner wasn’t trained as a contractor. In fact, he was an accountant by trade. His son, who spent many happy years in the cave before spreading his wings and moving above ground, chipped in whenever he could. Vannice says a few friends may or may not have gotten roped into helping, too.

While he could wax poetic about the cave’s all-natural stalactite accents all day, Vannice’s favorite feature of the home is its four-person elevator that travels 120 feet below the Earth’s surface to the cave’s living space. The elevator came from an old dam in Ohio and was trucked out to Colorado where it was installed in the shaft, hand-drilled by the owner himself with the help of a crane.

If you’re wondering why the listing doesn’t mention the elevator, it’s because it’s not certified. That said, Vannice insists the owner and his wife use it every day, with no problems.

Of course, the cave is also accessible by stairs — all 168 of them. They wind through the boulder walls and down the side of a cliff guaranteed to give anyone with a fear of heights an immediate heart attack. “Still, I’ve taken the stairs many times,” said Vannice. “You just gotta kind of be like a mountain goat to do it.”

Indeed, this home, which has creature comforts such as a pool table, a full kitchen and a wraparound deck with river views, requires the most resolute of residents. If you’re not OK with embracing your inner caveperson on a daily basis, or sharing your living quarters with a bat or two, this probably isn’t the place for you. The listing, which gives very few details about the actual living space, even says the owners “make no claims regarding the habitability.” (With its low hanging rock ceiling in the rec room, it certainly isn’t ideal for an NBA player.)

Be that as it may, Vannice is quick to point out that it was the owners’ full-time residence for many years — and it does come furnished.

“They’re selling it now because they’re in their golden years,” said Vannice. So will they be trading it for something more move-in ready like this Texas craftsman with a Batman cave? Nope. According to Vannice, the cave life no longer suits his clients.

The property is already receiving lots of interest.

ZILLOW’S WRECKLESS NEW 2023 Housing Market Forecast
Hang on, America’s Railway workers want WHAT? Are they crazy? | Redacted with Clayton Morris
The Next Market Crash | How To Get Rich In The 2023 Recession
U.S. to backstop mortgages over $1 million for first time
My Number 1 Real Estate Investing Strategy #realestateinvestment #investingstrategy