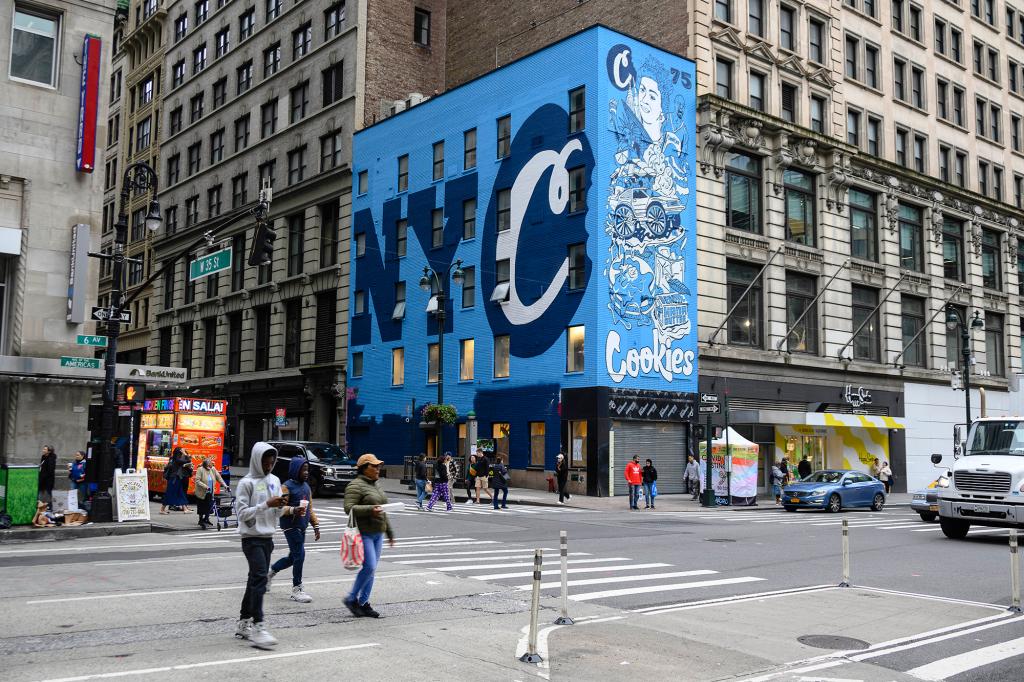 The nation’s largest cannabis lifestyle company has leased a small, but prominent, building in Manhattan’s Herald Square — which has been painted in signage that some say may flout draft state regulations for advertising marijuana and stores.

Cookies, whose co-founder, Gilbert Anthony Milam Jr. — otherwise known as the rapper Berner who was featured on the cover of Forbes’ August/September issue — leased the entire 6,600-square-foot building at 958 Sixth Ave., The Post has learned.

The San Francisco-based company confirmed it intends to open a store that, for now, will sell everything from its shirts to skateboards, accessories and legal CBD products — and also host educational classes for budding entrepreneurs.

“The NYC Cookies location will only be selling Cookies SF clothing and CBD products that are legal for sale in the state of NY,” a spokeswoman said via email. “This location in Herald Square will not have ANY THC products for sale until they are legally able to.”

The lower portion of the sign spells out the company name “Cookies,” in a fluffy cartoon-like font. The word “cookies,” as it relates to cannabis marketing, appears to be completely verboten under the draft regulations.

Comments on these rules closed on Aug. 15 — but so far ban bright neon colors along with words and symbols appealing to those under 21, “including but not limited to, any imitation of food, candy, soda, drinks, cookies, or cereal, in labeling, packaging, advertising, or marketing.”

The building’s mural is sky blue and white, and the larger north-facing facade is emblazoned with “NY” and Cookies’ logo “C.” The Herald Square side depicts a cartoon image of a young Queen Elizabeth for its pot brand “London Pound Cake 75,” plus cartoon images of the brand’s other real pot products — Bernie Hanna Butter, Pancakes and other varieties — many of which are food-related and have names that also seem to be thus far banned under New York State’s proposed advertising rules.

There’s even an image of someone smoking a joint, which David Feder, who bills himself as the Weed Lawyer, advised, “That’s a clear violation of the proposed regulations.”

Passersby may recall the building already has a history of decorative flair. The property was previously leased to the Spanish fashion company Desigual — “Unequal” in English — which had the Spanish artist Okuda paint a colorful mural all over it.

A spokesman for the New York State Office of Cannabis Management, Aaron Ghitelman, said via email, “The Office will not be issuing approvals or denials for advertising and marketing. While the proposed regulations for marketing and packaging have not yet been finalized by the Cannabis Control Board, it is incumbent of the licensed entities to ensure they are aware and fully educated on all laws, regulations and guidelines which have been issued and to comply with them. If they do not follow regulations, the Cannabis Control Board has the power to levy consequences.”

Still, some who work in the local cannabis industry believe the Cookies mural, while creating grand signage for the store, is just not quite kosher.

“It’s very aggressive and there are certainly going to be people out there saying they are flouting the rules — but from an actual legal standpoint, they are not doing anything wrong,” said Joseph Levey, a partner with the hospitality-focused law firm, Helbraun & Levey.

Another lawyer, Lauren Rudick, a partner with Hiller, says the regulations are in flux and besides, Cookies has the right to promote its products so long as it doesn’t sell pot in the state.

“People should focus on their own launches as opposed to try to take down this one competitor,” Rudick said, adding of the marijuana laws in general, “There are a lot of grey areas and loopholes.”

In early October, Berner tweeted out a video of the new digs to his nearly 305,000 followers, saying: “Dream big!! In Herald Square , yes across the street from macy’s , where the f–king thanks giving parade is ! Wow ! Meet me there 10/30.”

That’s when Cookies intends to have a grand opening – subject to change, the company warned — for the store and classrooms for a cannabis college to make “a hub for education and cannabis culture,” the Cookies rep said of the latter. “One aspect of creating that hub will be to establish it as a campus for Cookies U, Cookies’ free training & education program, offered to people who qualify under social equity criteria.”

(That said, nearly 1,000 ethnic minorities and others with state pot convictions applied for the coveted social-justice cannabis licenses — and aim to learn the business.)

“Our partner is also exploring being able to offer cannabis career training with local colleges within the space,” the company added.

To date, no licenses to sell pot or THC have been allocated by the state for any of the social-justice programs, the new consumption lounges or stores — but for the latter two, potential licensees must lease a store and pay rent long before they even know if they have a license. Levey has such clients who are trying to find “creative ways” to generate revenue while they wait. He also gave props to Cookies for its chutzpah — and for finding a way to meet other potential licensees they can work with.

“They would have to maintain social equity status and not give up full control but there will be a way for them to ally with groups that have operational experience,” Levey said.

In July, JTRE purchased the building for $9.7 million, leased it to Cookies — and the new artwork was applied.

The draft state regulations say advertising and marketing signs cannot be a “billboard,” and while signage is allowed to advertise the actual store, it must be limited to the “(i) business or trade name, (ii) business location, and (iii) the nature of the business.”

“This sign appears to go far beyond that” Feder said.

It also cannot be more than 1,600 square inches for two signs – the equivalent of 133 square feet – and far smaller than the two sides of a five-story building that has 18 feet of frontage on Sixth Avenue and another 60 feet on West 35th Street.

“A huge building-sized sign likely violates this,” Feder added. “Cookies has benefited from the fact that they are a lifestyle brand, which also includes cannabis products. The legal question at play here appears to be, ‘What is Cookies the brand?’ If it is a cannabis brand, then their advertising and marketing must comply with the regulations released by the Cannabis Control Board.”

Other states have similar regulations. For instance, after billboards sprouted all over, Michigan rules banned them “where the advertisement is visible to members of the public from any street, sidewalk, park, or other public place.” Other ads, such as in magazines, can’t use cartoons or be placed where more than 30% of the audience are children. In California, 71.6% of the ad’s audience has to be adult — and while no toys or cartoons are allowed, no billboards are permitted within 15 miles of California’s border on an interstate highway. Both states also need warning labels on products, as does New York.

As the pot purveyors, states and federal government have more experience, laws will be tweaked especially when everyone worries about creating pubescent pot smokers. Rudick even added that a friend in California has a challenge every time she drives and her very young children spot Cookies’ big billboards.